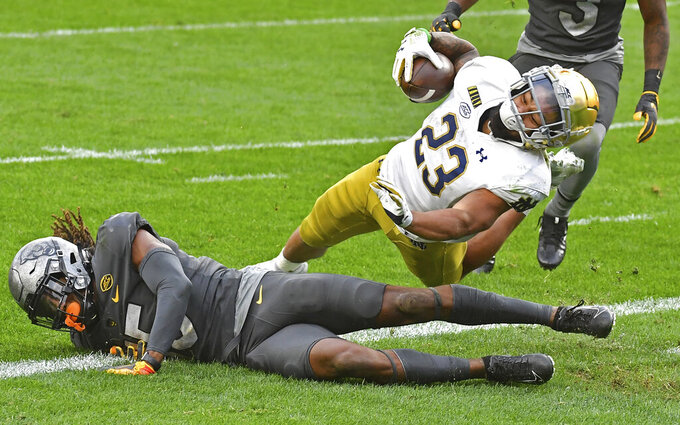 Notre Dame running back Kyren Williams dives into the end zone for a touchdown against Pitt defensive back Jason Pinnock in the second quarter of an NCAA college football game, Saturday, Oct. 24, 2020, in Pittsburgh. (Matt Freed/Pittsburgh Post-Gazette via AP)

The Fighting Irish can't afford to stumble heading into their Nov. 7 showdown against top-ranked Clemson. For Georgia Tech, this is a chance to make up for its dismal showing against Clemson two weeks ago, when the Yellow Jackets gave up their most points since the 1890s in a 73-7 loss to the Tigers.

Notre Dame's running game vs. Georgia Tech's front seven. The Fighting Irish have more yards rushing than passing, averaging 5.1 yards per carry. Kyren Williams leads with 524 yards and five touchdowns, and Chris Tyree and C'Bo Flemister are both averaging more than 6 yards each time they run the ball. That doesn't bode well for Georgia Tech, which ranks 77th nationally in rushing defense, surrendering an average of 198.7 yards per game.

Notre Dame LB Jeremiah Owusu-Koramoah. He's spent a lot of time in opposing backfields, making six tackles for losses including a sack. He also has an interception and forced fumble, which should have him licking his chops as he prepares to face a team that has a minus-seven turnover margin.

Georgia Tech QB Jeff Sims. The freshman certainly has a promising future, but the present has dealt him some tough on-the-job training. Last week, he had a fumbled snap and an interception, both of which led to Boston College TDs. Sims was taken out after the third-quarter pick, with former starter James Graham going the rest of the way.

Notre Dame held the ball for nearly 41 minutes in its rout of Pittsburgh last week, the largest time of possession by an ACC team this season. The Irish are averaging 34:11 in possession time, which leads the ACC and ranks seventh nationally. ... Georgia Tech has committed 18 turnovers, which is only two shy of its total for all of 2019. ... These teams were scheduled to meet this season at 75,000-seat Mercedes-Benz Stadium, home of the NFL's Atlanta Falcons. But after the coronavirus pandemic struck and the number of fans was limited, the game was shifted to Georgia Tech's campus stadium. ... Notre Dame has an 11-game winning streak, the longest in FBS. The Irish also have won five straight road games against ACC competition.

By Emily Wagster Pettus 15 minutes ago
By Aaron Beard an hour ago
By Ralph D. Russo 2 hrs ago
2 hrs ago
By Tim Reynolds 3 hrs ago