No. 9 Baylor still a B12 title shot with win over Texas Tech 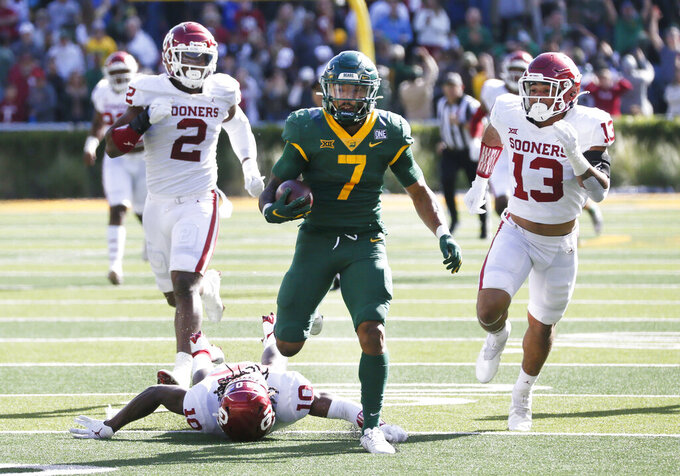 Baylor running back Abram Smith (7) breaks free on a 75-yard run as he is chased by Oklahoma linebacker David Ugwoegbu (2), safety Pat Fields (10) and linebacker Shane Whitter (13) during the second half of an NCAA college football game in Waco, Texas, Saturday, Nov. 13, 2021. (AP Photo/Ray Carlin)

Line: Baylor by 14 1/2, according to FanDuel Sportsbook.

Baylor still has a chance to get into the Big 12 championship game for the second time in three years. The Bears first have to beat Texas Tech in their home finale, and have No. 7 Oklahoma State beat No. 10 Oklahoma in Bedlam later that night. Bowl-eligible Texas Tech is coming off a 23-0 loss to the Cowboys. That ended the Red Raiders' streak of scoring in 302 consecutive games since 1997. Tech is trying to clinch its first winning record since 2015.

Baylor's defense against Texas Tech coaches. The Bears probably have to change some defensive signals since their former outside linebackers coach Joey McGuire is now Texas Tech's new head coach. McGuire left Baylor when he got that job earlier this month, though he's not taking over the on-field role with the Red Raiders until after this season and isn't expected to make the trip to Waco. There is still his knowledge of the Bears after more than 4 1/2 seasons at Baylor.

Baylor: Big 12 rushing leader Abram Smith (1,249 yards) is 299 yards from the single-season school record with at least two games left to play, and maybe three. His seven 100-yard rushing games are one short of Walter Abercrombie’s school record of eight set in 1980.

Texas Tech and Baylor combined for only 47 points last season, the fewest since a 20-13 win by the Red Raiders in 2009. In the 10 meetings in between those two games, both teams averaged more than 35 points, and each scored at least 30 points in all but one of those games. ... Baylor is one of six teams that hasn't allowed more than 30 points. Texas Tech averages 30.5 points per game, even with that shutout last week.