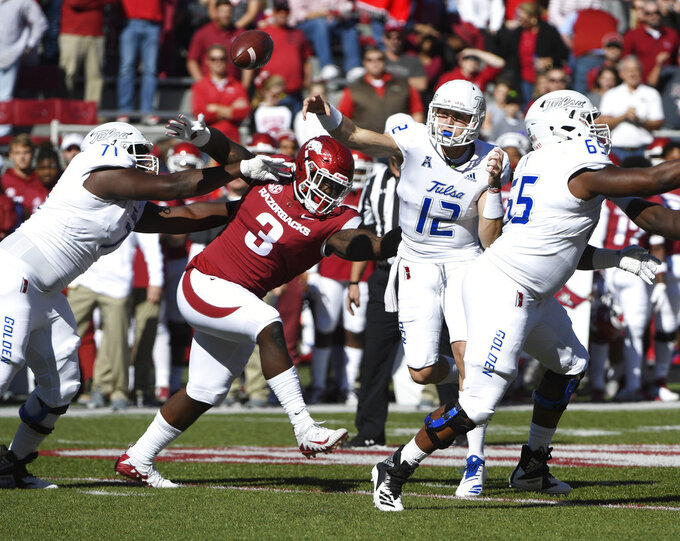 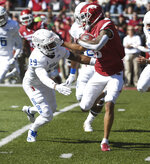 FAYETTEVILLE, Ark. (AP) — When Arkansas freshman quarterback Connor Noland trotted off the field after throwing an interception on the first drive, Razorbacks coach Chad Morris didn't have to say much to make sure his first-time starter stayed confident.

This was the moment kids across Arkansas (2-6) dream of, especially ones like Noland — an Arkansas native and fan his entire life.

Morris stuck with his quarterback, and the move paid off in a 23-0 victory over Tulsa on Saturday.

"I just kind of patted him on the head and said, 'Hey, hang in there. It'll be all right.'" Morris said. "If you play football long enough, you're going to have some things that go against you. It's really just about the response."

Aside from that negative play, there were a lot of positives to choose from with Noland. He went 10-of-16 passing for 124 yards and scored his first career touchdown.

On the scoring play, which came late in the first half, Noland found sophomore Grayson Gunter from 7 yards out after the rushing attack, led by sophomore Rakeem Boyd, opened up the play-action passing game.

"I tried not to (think about the situation)," Noland said. "You grow up watching the Hogs play, and to be out there and get my first start meant a lot to me. It was a big moment, but I just tried to downplay that a little bit and focus on the game."

The start marked Noland's first in-game action since the North Texas game Sept. 15, a day that could be considered Arkansas' lowest point in the season. In that game, the freshman was inserted late when the Mean Green already had an insurmountable lead and he didn't get a chance to compete with meaningful snaps. Against Tulsa, the Razorbacks' defense stepped up and gave the program its first shutout since 2014.

"When you get the ball on the 40-yard line a couple times, that definitely helps," Noland said.

Boyd nearly eclipsed the 100-yard rushing mark for the third-straight game, but he finished just shy with 99 yards on 22 carries. Freshman Maleek Williams picked up his biggest workload of the season, carrying the ball nine times for 23 yards and a score.

On the other side, Tulsa's (1-6) offense had abysmal numbers in the second half until freshman quarterback Seth Boomer completed a 65-yard strike to sophomore receiver Keylon Strokes on the team's final drive. The scrambler was 8-of-25 passing through the air for 127 yards and a pick.

"I didn't see our guys give up. that's not in our DNA," Tulsa coach Philip Montgomery said. "The only way he's gonna get better is if he continues to go through some of the things he's going through right now."

For Arkansas, the victory — which was the program's 19th straight over Tulsa — ended a six-game losing skid that began after the season-opening victory over Eastern Illinois on Sept. 1.

Although Arkansas' offense didn't put up the 476 yards it did against Ole Miss with Storey at the helm, Noland showed his ability to lead a Southeastern Conference offense. The dual-threat gunslinger also made his presence felt in the ground game, carrying the ball five times for 20 yards. It marked the first time a true freshman quarterback started a game for the Razorbacks since Mitch Mustain did so against Utah State on Sept. 9, 2006.

After putting up a respectable 145 yards in the first half, the Golden Hurricanes fell apart after coming out of the locker room for the third quarter. They managed only 12 yards on 18 total plays in the third_good for a negative average. Prior to the shutout, Tulsa was averaging 24.3 points per game.

Razorback junior kicker Connor Limpert was 3-for-3 on field goals, and he's now made 15 of 18 attempts for the season. The Texas native hasn't missed a kick 30 yards or fewer all year.

The Golden Hurricanes will play Tulane on Saturday.