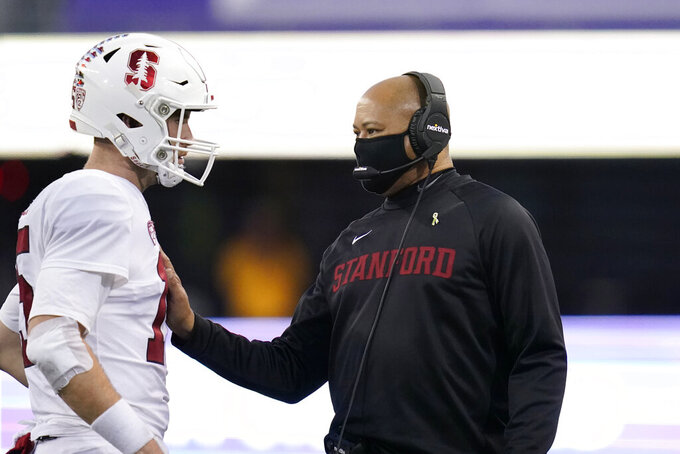 Stanford coach David Shaw, right, talks with quarterback Davis Mills during a timeout in the second half of the team's NCAA college football game against Washington on Saturday, Dec. 5, 2020, in Seattle. Stanford won 31-26. (AP Photo/Elaine Thompson)

After sitting out last weekend's game at Utah, Jefferson has returned to practice and was cleared to play against Stanford on Saturday. His status had been uncertain earlier this week after he had to quarantine under the league’s COVID-19 protocol.

“Do I have a vote whether or not we see Jermar Jefferson? Are we voting?” Stanford coach David Shaw said good-naturedly. “He’s been the most explosive back in the conference. He’s a special player, and I hope for his sake, too, that he does play. All these games are better when our top players play. If you can’t play, I get it, I understand it. This is a crazy world we live in now. He’s a difference-maker.”

The junior running back has run for 675 yards and seven touchdowns this season, including 226 yards and two TDs in his last outing, the Beavers' 41-38 upset win over rival Oregon. He's averaging 168.8 yards a game.

He was among a trio of players, along with linebacker John McCartan and wide receiver Rweha Munyagi Jr., who were unable to play for the Beavers (2-3) against the Utes last weekend. Oregon State rallied but fell short 30-24.

Stanford (2-2) is coming off a 31-26 victory at Washington last weekend, the team's second straight win. The Cardinal have been on an extended road trip because of coronavirus restrictions in Santa Clara County, California.

The game against the Beavers was originally scheduled for Palo Alto but was moved because of the county's three-week sports restrictions. The Cardinal have been practicing this week at Oregon State's indoor facility after leaving Seattle.

The victory over Washington gave the Cardinal some much-needed momentum after a rough start to the abbreviated season. Stanford lost its first two games before a victory in the Big Game against Cal.

“We’re not where we would want to be necessarily yet but we are playing a lot more like we would like to play and more like we’re capable of playing,” Shaw said. “Our young offensive linemen are growing and getting better. I think Davis (Mills) is now in full swing after the first two weeks not really being able to be himself. Defensively I thought we played a good game, especially in the first half.”

Stanford's quarterback missed the season opener at Oregon for what the Pac-12 later acknowledged was a coronavirus testing protocol mistake. He then played in a home loss to Colorado after having gone through one 45-minute practice.

Oregon State quarterback Tristan Gebbia will miss the rest of the season because of a left hamstring injury. Named Oregon State's starter for the season, Gebbia was injured on the Beavers' game-winning drive against the Ducks. He was set to have surgery this week.

Chance Nolan, who started last week against the Utes, will start for the rest of the season, Smith said.

The Cardinal have had to adjust to some strange circumstances on their extended road trip.

They held their walk-through ahead of the Washington game last weekend at Bellevue Park — that after Shaw tried to use an empty parking garage next to the team hotel before Stanford got kicked out some 10 minutes in by a security guard who thought the team was “loitering,”

Nearly two dozen ducks were on the grass at the park at one point, and it was so muddy players' feet sank into the soft ground. Some even took their shoes off and went barefoot. Some people walked by and snapped photos, politely offering a “Go Dawgs!” here and there.

“Public service announcement: We should not feed the ducks in public parks,” Shaw said. “I think that’s what’s been going on there because these ducks got very, very close, thinking our players were going to feed them. They were not a distraction, they were a welcome addition to our traveling circus.”

Stanford senior Connor Wedington and junior Michael Wilson, both wide receivers, are out and are unlikely to return this year, Shaw said.

“We still have depth,” Shaw said. “There’s a great comfort level with our guys right now. We don’t have to change a lot schematically.”

On Oregon State's receiving side, Champ Flemings and Trevon Bradford are recovering from injuries and are question marks for the game.