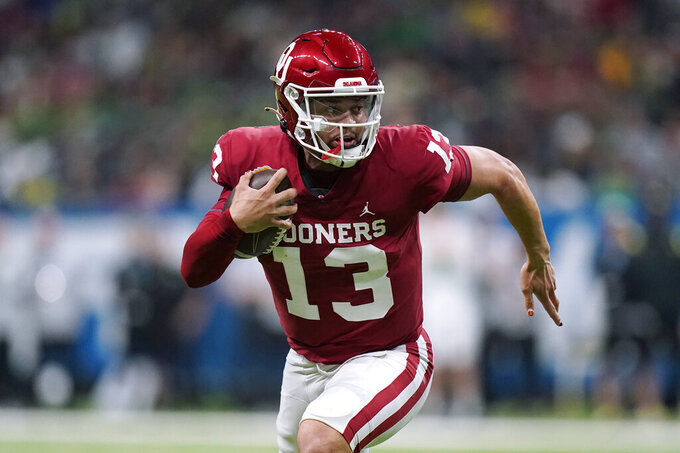 Oklahoma quarterback Caleb Williams said Monday he is entering his name in the transfer portal so he can speak with other schools.

The freshman added he had not ruled out staying with the Sooners, but within hours of Williams' announcement, Oklahoma might have found his replacement.

Former UCF quarterback Dillon Gabriel, who had committed to transfer to UCLA last month, posted on Twitter that he was instead planning to go to Oklahoma.

Williams, a former five-star recruit from Washington, D.C., who was recruited to Oklahoma by then-head coach Lincoln Riley, revealed his intentions on social media.

Riley left Oklahoma to become coach at Southern California the day after the Sooners ended their regular season with a loss to Oklahoma State. Former Clemson defensive coordinator Brent Venables was hired to replace Riley.

"I think we all come to college to find our path and prepare for the future. I came to Oklahoma with a plan, but with all the recent changes, I need to figure out what is the right path for me moving forward," Williams tweeted.

Williams would be one of the most sought-after transfers in college football.

He passed for 1,912 yards and 21 touchdowns and ran for 435 yards and six scores in 2020, taking over the starting job from preseason Heisman Trophy favorite Spencer Rattler midway through the season.

Williams led the Sooners (11-2) to a victory last week against Oregon in the Alamo Bowl.

“Proud of what we did this whole season but especially that last four weeks,” Williams said.

To be recruited and contacted by other schools within NCAA rules, Williams had to enter his name into the transfer portal, but that doesn't necessarily mean he is transferring.

“Staying at OU will definitely be an option as I begin this process,” Williams said.

Venables and Oklahoma athletic director Joe Castiglione released a statement saying they would “continue to be engaged” with Williams.

“While we believe OU provides Caleb the best opportunity to develop as a player and realize his goals for college and beyond, we respect his right to explore his options following key staffing changes here,” they said.

Venables hired Jeff Lebby away from Mississippi to be Oklahoma's offensive coordinator. Lebby spent the last two season working with quarterback Matt Corral, who is projected to be a potential first-round pick in the next NFL draft.

In five years with the Sooners, Riley coached two Heisman winners and first overall draft picks in Baker Mayfield and Kyler Murray. He also had Jalen Hurts, who transferred from Alabama and became a Heisman finalist and second-round draft pick at Oklahoma.

At USC, Jaxson Dart started much of last season as a freshman and is likely to be at the top of the depth chart again after former starter Kedon Slovis transferred to Pittsburgh.