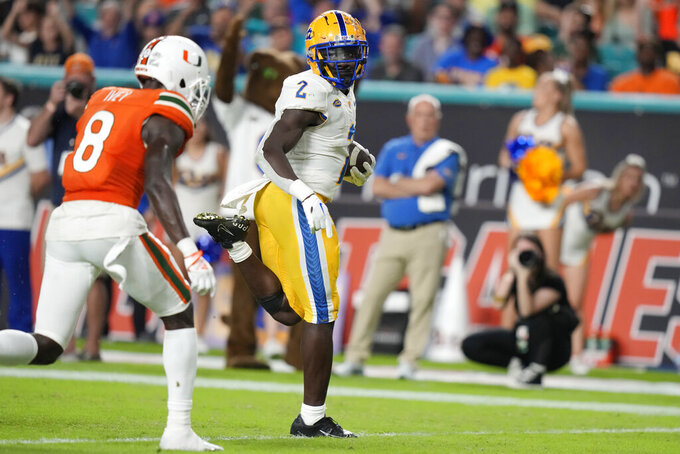 Kedon Slovis threw three touchdown passes, all to Jared Wayne, and Israel Abanikanda rushed for two touchdowns as Pittsburgh rolled past Miami 42-16 on Saturday night and eliminated the Hurricanes from bowl contention.

“It's still not a perfect game, but it's a glimpse of it, what I can do," said Wayne, who had career-highs of 11 catches, 199 yards and the three scores.

“Setting a standard comes with laying a foundation," said Hurricanes coach Mario Cristobal, whose first season back at his alma mater saw Miami lose more games (seven) than it did during his five years as a player there (five). “Sometimes it's really painful. And that's where we are ... we're not there now and certainly, we've got work to do."

Abanikanda now has 20 touchdown rushes this season and finished with 111 yards on the ground, his sixth consecutive 100-yard game for the Panthers (8-4, 5-3). Wayne had first-half TD catches for 26 and 66 yards as Pitt took a 28-0 lead into the break, then caught a 7-yarder late in the third.

It was Pitt's biggest win ever over Miami; the previous was a 17-point victory in 1976 — a year when the Panthers won the national title.

“A great way to end the regular season," Wayne said.

Jake Garcia threw two touchdown passes for Miami; Xavier Restrepo caught one, and tight end Will Mallory also got one in his final game for the Hurricanes.

Pitt beat Miami for just the fourth time in the last 26 meetings between the teams, plus went 4-0 in November for a second consecutive season. It also grabbed a small sliver of history — the contest was the last Coastal Division game to be played, with the ACC abandoning the two-division format starting next season.

It also was the 61st win for Pitt coach Pat Narduzzi, giving him outright possession of second on the Panthers’ all-time list. He was tied with Pop Warner.

The Hurricanes used three quarterbacks Saturday, which was fitting, since they had a revolving door at that position all season. Starter Tyler Van Dyke was back for the opening series but reaggravated the shoulder injury that kept him out for much of the season's second half. Jacurri Brown left in the third quarter after getting hurt, and Garcia played the rest of the way.

It was a season that began with such promise; Miami was the preseason pick to win the Coastal and started ranked No. 16 in the AP Top 25. But the Hurricanes lost their final five home games, making this the first season where that happened to Miami since 1963.

Van Dyke finished the season 160-for-253 passing, for 1,835 yards with 10 touchdowns and five interceptions. He entered the season widely presumed to be someone who would enter the 2023 NFL draft, and Miami has already seen at least six players publicly announce plans to enter the transfer portal — with more likely on the way.

“The portal's a two-way street," Cristobal said. “Not everybody's asked to return."

Pitt: Abanikanda is up to 1,431 yards rushing this season, eighth-most by any Pitt running back in a single season. He’ll need 58 yards in the bowl game to pass LeSean McCoy for the No. 7 spot on that list. ... Pitt fumbled the ball seven times but lost only one.

Miami: The Hurricanes announced a crowd of 46,428. In reality, it may have been about half that — and most of those folks were long gone by the finish. Miami’s average announced attendance this season was 45,711. Excluding the last two seasons, affected by the pandemic, it was Miami’s lowest average turnout since 2007.

Miami: Opens next season on Sept. 2, at home, against Miami of Ohio.