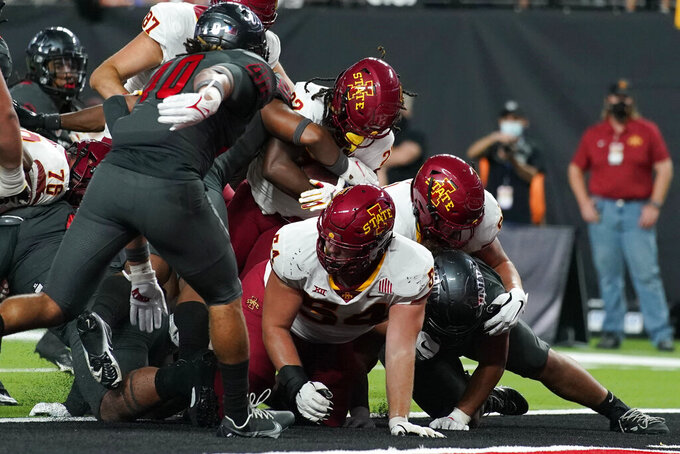 Iowa State running back Deon Silas (22) scores a touchdown against UNLV during the second half of an NCAA college football game Saturday, Sept. 18, 2021, in Las Vegas. (AP Photo/John Locher)

LAS VEGAS (AP) — After two lackluster offensive performances in its first two games, No. 14 Iowa State flew into Las Vegas with a sense of urgency.

The Cyclones are flying back to Ames, Iowa, with some pep back in their step.

Brock Purdy completed 21 of 24 pass attempts for 288 yards and three touchdowns to lead No. 14 Iowa State over UNLV 48-3 Saturday night.

Purdy, who also rushed for 33 yards, finished with a 229.6 quarterback rating, the third-highest of his career.

It was a major turnaround for Purdy from last week when he was benched during a 27-13 loss to in-state rival Iowa after completing 13 of 27 passes, throwing three interceptions and turning in a career-low 68.9 passer rating.

“Coming off last week it was rough, just the way we played, our mindset and everything,” Purdy said. “My mindset, big game last week, it hurt. There was no joy, no excitement, no sense of urgency.

“Just to get on the road, get away, come out here and just play football with the guys was our main mission and goal. Still some stuff we’ve got to clean up, but it was a good confidence booster, for sure.”

Iowa State (2-1) finished with 486 yards of offense and 7.59 yards per play, scoring on eight of its 11 possessions, including six touchdowns.

Breece Hall, who rushed for 69 yards in each of Iowa State’s first two games, rushed for 70 of his 101 yards in the first quarter to lead the Cyclones’ rushing attack. Hall scored two touchdowns.

Wide receiver Xavier Hutchinson, who entered the game with 110 total receiving yards this season, had 10 receptions for 133 yards and two touchdowns.

“I think we played with the intensity and the sense of urgency I expected our football team to have,” Iowa State coach Matt Campbell said. “For whatever reason I’ve done a poor job prior to early on this week of getting that sense of urgency demanded. I put those things on my shoulders. I was proud of our leadership. I thought they responded.”

As efficient as Iowa State’s offense was while Campbell had his starters in the game, the defense was just as suffocating after entering the game ranked eighth with 224 yards allowed per game.

“I’ll continue to say our defense is the heart and soul of this team,” Purdy added. “They got a bunch of stops, they’re awesome, they’re lights out.”

UNLV freshman Cameron Friel and junior Tate Martell split time at quarterback, both seeing action for the first time as Rebels. Friel was 7 for 12 for 55 yards with one interception, while Martell finished 2 of 6 for 27 yards.

Running back Charles Williams had 46 yards rushing on 19 attempts.

“The challenge we’ve got is to see if our guys can come and compete and believe that they can find some matchups in there,” UNLV coach Marcus Arroyo said. “This week, another challenge versus an elite team. Our guys are resilient, they keep fighting. They do, they fight, they care about each other, they care about losing.”

Iowa State set the tone by working methodically to score on its first two drives of the game.

Hall increased his school-record and nation-leading streak to 15 consecutive games with a rushing TD, which also tied the Big 12 record, set by Missouri quarterback Corby Jones from 1997-98. Purdy, meanwhile, became Iowa State’s all-time leader in total yards with 10,638. The previous high was Bret Meyer, who had 10,421 yards from 2004-07.

UNLV: The Rebels started a different quarterback for the third straight game. UNLV started TCU-transfer Justin Rogers in its season-opener against Eastern Washington. He was replaced late in the third quarter by redshirt freshman Doug Brumfield, who started last week at Arizona State. Brumfield did not dress Saturday.

Iowa State could find itself ascending in the rankings after its impressive performance, coupled with No. 11 Florida’s loss to top-ranked Alabama and No. 13 UCLA’s loss to unranked Fresno State.