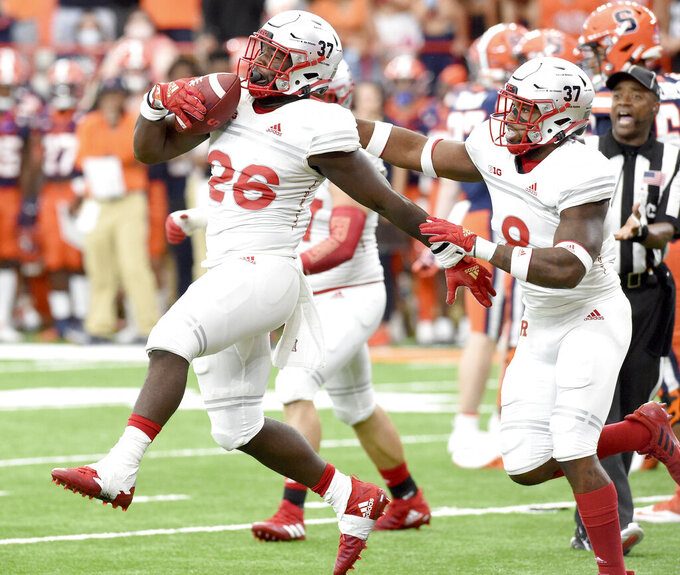 While the Scarlet Knights (2-0) of the Big Ten Conference are off to a good start, they know playing a Football Championship Subdivision team is not a walkover, especially this season.

Delware (2-0) isn't your ordinary FCS team. The Blue Hens have everybody back from the spring when they went 7-1 and lost in the national semifinals.

Delaware coach Danny Rocco said his team has to be at its best and hope it is close enough at the end to have a chance to win. That's what Jacksonville State did, winning on the 59-yard pass play as time expired.

"I don’t think we lack confidence, but, for sure, to see so many FCS teams go into FBC stadiums and win games just proves on any day, anyone can be beat,” Delaware quarterback Noah Henderson said.

Schiano has experienced the big upsets against lower division teams at Rutgers. During his first tenure, the Scarlet Knights lost to New Hampshire and Villanova.

Rutgers has not turned the ball over this season and it leads the nation with a plus-8 turnover margin. The Scarlet Knights are third nationally with only five penalties, fourth in allowing just a 14.8% conversion rate on third-down attempts, and 11th in scoring defense at 10.5 points.

The Blue Hens also have not turned the ball over and they have five takeaways — three interceptions and two fumble recoveries.

The last time Delaware played an FBS team was in 2019. It dropped a 17-14 decision to Pittsburgh. The Panthers went 8-5 that season and won a bowl game.

The Blue Hens' last win over an FBS team was in 2007 when they beat Navy 59-52. Their quarterback was Joe Flacco, who later won the Super Bowl with Baltimore.

Delaware has two good wide receivers in Gene Coleman II and Thyrick Pitts. Both had 100-yard games in the season opener against Maine. Pitts leads the team with 177 yards receiving and two touchdowns. Coleman has 159 yars and one TD.

Linebacker Olakunle Fatukasi is the catalyst of the Rutgers' defense. He leads the Big Ten with 11 tackles per game. He had 13 stops at Syracuse, his ninth career double-digit game. He had three sacks in the opener, including one for a safety.

Defensive back Max Melton has two interceptions, including one for a TD.

Rutgers punter Adam Korsak averaged career bests with a 52.2 average and 51.7 net in the win at Syracuse. The Scarlet Knights rank second nationally with a net punt average of 50.7.

A native of Australia, Korsak placed five of six punts inside the 20 against the Orange, including 69-yarder, the seventh-longest in program history, that settled at the 1. He is fourth nationally with a 50.2-yard average.

Delaware placekicker Ryan Coe has made all four of his field goal attempts this season.