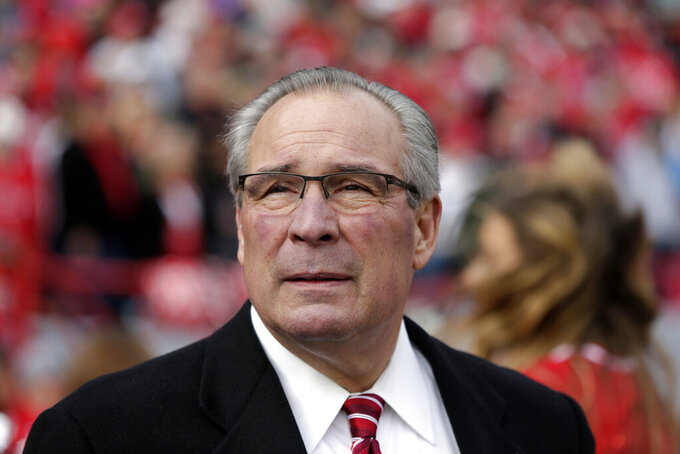 FILE- In this Nov. 4, 2017 file photo, Nebraska Athletic Director Bill Moos is seen at Memorial Stadium in Lincoln, Neb., before an NCAA college football game. Faced with the possibility college football games will be played in stadiums with reduced capacities as a safeguard against coronavirus, athletic administrators at schools with high ticket demand are making plans to determine who gets a seat. This is a particularly painful task for athletic director Bill Moos of Nebraska, which has sold out every home football game since 1962. The Cornhuskers are a year-round passion in his state. The season ticket renewal rate for the 2020 season is a robust 93 percent. (AP Photo/Nati Harnik, file)

Athletic administrators at schools with high ticket demand for college football are making plans to determine who gets a seat if stadium capacities are reduced because of concerns about the coronavirus.

This is a particularly painful task for athletic director Bill Moos of Nebraska, which has sold out every home football game since 1962. The Cornhuskers are a year-round passion in his state and the season ticket renewal rate for the 2020 season is a robust 93%.

So which fans will gain entry to 85,000-seat Memorial Stadium if capacity is reduced by half or even 75%?

Moos and his staff are weighing a number of variables, including whether all or some of the seven scheduled home games are played. How much money the season-ticket holder donates annually and how long he or she has owned the season tickets are also factors to determine priority. Moos is quick to point out that doesn't mean people down the list would get shut out.

“If they haven’t been with us for 40 years and given us a generous amount of money, they’re still fans and there should be a place for them as well,” he said.

Moos said it's possible some Husker fans would be allowed to attend five games, some four, some three and others two.

The ticketing dilemma is just one wrinkle schools are working through as college football pushes toward some kind of season. The complications of bringing students back to school and ensuring they are safe vary from state to state and from campus to campus. But most schools are planning for games -- and putting fans in the seats if they can.

“I’ve been in this industry 50 years and dealt with a lot of stuff, but nothing like this,” said Fred Maglione, a Philadelphia-area consultant in the sports and live entertainment industry. “Everybody’s trying to figure this out. The real challenge is that you don’t just have a Plan A and a Plan B. You’re down to Plan Z. You have so many different scenarios you run through your mind every day because the playing table changes every day.”

At Alabama, the ticket renewal rate was 90% for 102,000-seat Bryant-Denny Stadium. Spokeswoman Jessica Pare didn't disclose how Alabama would determine which fans can attend other than to say different models are being looked at and "our hope is not to have to use those models.”

At Ohio State, where the renewal rate was 88%, athletic director Gene Smith has said he could envision games played with no more than 40,000 to 50,000 in 102,000-seat Ohio Stadium. Consideration would be given to parents and guests of players, students and faculty.

A priority points system likely would determine who else gets in. That system awards points for, among other things, amount of money donated, consecutive years as a season ticket holder, and whether the ticket holder is an alumnus or letter winner in a varsity sport.

Clemson athletic director Dan Radakovich said there have been orders for 60,000 season tickets at 81,500-seat Memorial Stadium, and no priority system has been finalized. Arkansas has sold 31,000 season tickets and stopped single-game sales until it's known how many fans will be allowed in 76,000-seat Razorback Stadium.

Moos said he expects to know by mid July how many Nebraska games will be played and if the season will start as scheduled. Then, once the stadium capacity is established, he’ll set into motion the plan for how holders of the 70,000 season tickets will be accommodated.

Regardless of capacity, Moos sees no end to the Huskers’ ongoing NCAA record sellout streak, which stands at 375 games.

Maglione said ticket renewal rates might not be true indicators of demand in the coronavirus era. He said some fans who renewed after the virus emerged in March might have done so in order to hold their seats for future seasons. They might not plan to go to any games this season.

To get the most people allowable into the stadium, Maglione said, athletic departments likely will need to secure confirmations from those who plan to attend. Space will open for fans lower on the priority list if ticket holders with higher priority don't feel safe and stay away.

“You're going to have to raise your hand if you want to go, I have a hunch,” Maglione said. “Athletic departments are going to have to be in communication with fans each week to say who wants to attend and then there’s going to be some kind of priority system and/or lottery system.”