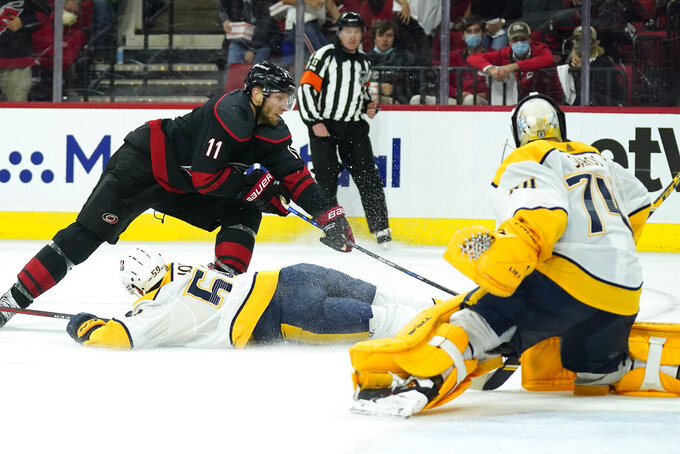 RALEIGH, N.C. (AP) — The Carolina Hurricanes had a building full of rowdy fans again, players back from injury and a strong showing from their captain to help break open a close game.

The Central Division champions got the start they needed in the postseason.

Jordan Staal scored twice and Nino Niederreiter beat Juuse Saros for the go-ahead goal early in the third period, helping the Hurricanes to a 5-2 win over the Nashville Predators on Monday night to open their first-round playoff series.

The Hurricanes trailed 1-0 early against a team that added some size to the lineup and a physical edge, but began to establish their style of play more effectively in the second period and then took over the final 20 minutes.

By the end, Carolina had finished with a 38-24 edge in shots on goal and outhit the Predators in a game with plenty of chippy moments and chesty exchanges between the teams.

“I'm not concerned at how the game is going to be played, because we kind of have shown that all year,” coach Rod Brind'Amour said. "Whatever style ends up playing, we've answered the bell, always. If it's an up-and-down game, OK, we can do that. If it ends up being a little grittier, that actually suits us, too."

Niederreiter hammered the puck past Saros from between the circles at 2:26 of the third, finishing a perfect pass from Martin Necas only moments after Saros had made a big stop on Vincent Trocheck. That broke a 2-all tie as the Hurricanes made their move.

Staal followed with his second goal midway through the second, created partly by his own pressure on the forecheck. After Saros stopped a shot near the post from Warren Foegele, the captain gathered the loose puck and pushed it past Saros for a 4-2 lead at the eight-minute mark.

Andrei Svechnikov added the clinching empty-netter on a breakaway at 18:13 for Carolina.

Teuvo Teravainen scored a first-period goal for the Hurricanes, while Alex Nedeljkovic made 22 saves in his first playoff start.

Erik Haula also scored for the Predators, while Saros — who entered the postseason as one of the league’s hottest players — finished with 33 saves.

The Hurricanes host Game 2 on Wednesday night before the best-of-seven series shifts west to Nashville in neighboring Tennessee.

PNC Arena was loud again after the state loosened COVID-19 protocols regarding public gatherings and physical distancing earlier this week.

The Hurricanes welcomed a towel-waving crowd of about 12,000 for this one, roughly two-thirds full. The team had roughly 5,000 fans attending home games to close the regular season.

Gov. Roy Cooper — a notable Hurricanes fan who announced the protocol changes — sounded the pregame storm-warning siren for the Hurricanes to take the ice.

Carolina had won the first six meetings of the eight-game season series on the way to winning its first division crown since winning the franchise's only Stanley Cup 15 years ago.

The Predators won the last two meetings to close the regular season, securing their seventh straight trip to the postseason behind a late surge that had Nashville steadily climbing the division standings since March.

Nashville coach John Hynes decided to get more size in his lineup, going with 6-foot-5 defenseman Erik Gudbranson (222 pounds) instead of Dante Fabbro (6-0,189). And forward Tanner Jeannot (6-2, 208) was bumped up from the fourth line to the third.

“We can talk all about the lineup all we want, but we played physical,” Hynes said. “We played hard. It was a physical game, and we didn't find a way to win one.”

Carolina defenseman Jaccob Slavin missed much of the week’s workouts with a lower-body injury suffered in the second-to-last game at Nashville. He was a game-time decision, and had 21:25 of ice time.

The Hurricanes also got back forward Brock McGinn who had missed 19 games since early April with an upper-body injury.

Nashville is 0-11 when losing Game 1 of a playoff series.