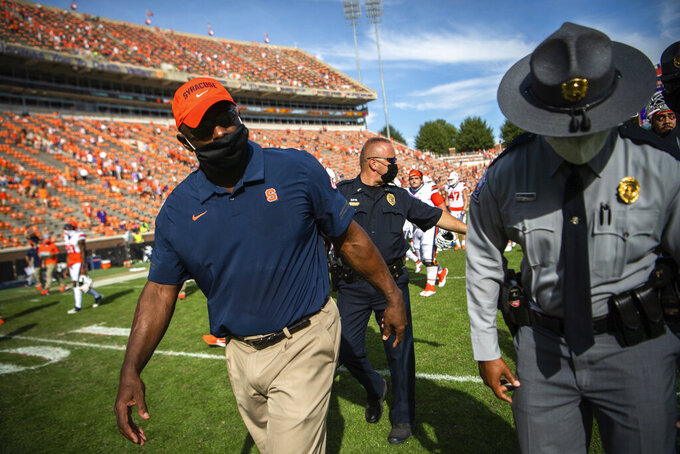 A week after giving top-ranked Clemson fits for nearly three quarters, Syracuse is eager to prove it wasn't a fluke.

The unbeaten Tigers led by just six points late in the third quarter last Saturday in Death Valley before pulling away for a 47-21 victory. The Orange (1-5, 1-4 Atlantic Coast Conference) have lost three straight and hope that effort is a sign of better things ahead.

“Honestly, I feel like the team already knew that we could play like that. It was just a matter of time,” redshirt sophomore wide receiver Anthony Queeley said. “It has a lot to do with the seniors and the guys at the top of the pyramid. We just have to bring that same energy with us every week to every team that we play and not just Clemson.”

Up next is Wake Forest (3-2, 2-2) in the Carrier Dome on Saturday. The Demon Deacons, who began the season with a 37-13 loss to Clemson, have won three straight after a bumpy first month that also included a 45-42 setback at North Carolina State. From there, a game against then-No. 3 Notre Dame was postponed because of coronavirus issues for the Fighting Irish, and Wake Forest had to reschedule a nonconference game against Campbell to avoid having consecutive open weeks and won that 66-14.

The Demon Deacons followed with consecutive home wins against Virginia and then-No. 19 Virginia Tech and now have a chance for a fourth straight win.

“I think some of those bye weeks early maybe helped us develop,” Wake Forest coach Dave Clawson said. “We’ve got a bye week after this and certainly that five-week stretch at the end is going to be challenging. We’ve got to try to get this one and play well and do everything we can against Syracuse, and then we’ll deal with that other problem later.”

Other things to know for Wake Forest-Syracuse. The Orange are 4-1 at home against the Deacons:

Wake Forest leads the country in turnover margin at plus-11, with the Demon Deacons having nine interceptions with three fumble recoveries compared to just one lost fumble and no picks. That includes five interceptions in the past two ACC victories after forcing just two turnovers in the first two league games that resulted in losses. The Orange lead the nation with 17 turnovers gained.

When Syracuse coach Dino Babers was asked about Wake Forest, the first words out of his mouth were, “No. 9 is amazing. He’s so, so good."

That would be defensive end Carlos Basham Jr., who owns a streak of 23 consecutive games with a tackle for loss, the longest in the nation.

“This guy may be the best defensive player we’ve played all year,” Babers said. “You turn on the tape and he literally stands out.”

True freshman walk-on Nick Andersen has had quite a start for Wake Forest. He's started the past two games at safety in a banged-up secondary and had three interceptions against Virginia Tech, marking the first three-interception game for a Wake Forest player since 1987. He's also second on the team with 33 tackles.

“He got ready for the opportunity,” Clawson said. “What he’s doing isn’t an accident. He came here with the mindset Day One that he was a player.”

Redshirt senior Rex Culpepper is listed first at quarterback on the Syracuse depth chart for the third straight game in place of injured Orange starter Tommy DeVito. Culpepper was 10 for 26 for 175 yards and an 83-yard touchdown to Nykeim Johnson against Clemson, but he threw three interceptions. The backups are freshmen Dillon Markiewicz and JaCobian Morgan, who played briefly against Clemson, his first action in college.

Wake Forest had big holes to fill at receiver with the loss of Sage Surratt, Scotty Washington and Kendall Hinton from last year. Redshirt junior Jaquarii Roberson is starting to provide some consistent production for that revamped position group. He's had at least six catches in three of four ACC games, including seven for 126 yards against Virginia, and leads the team in both catches (26) and yardage (360).