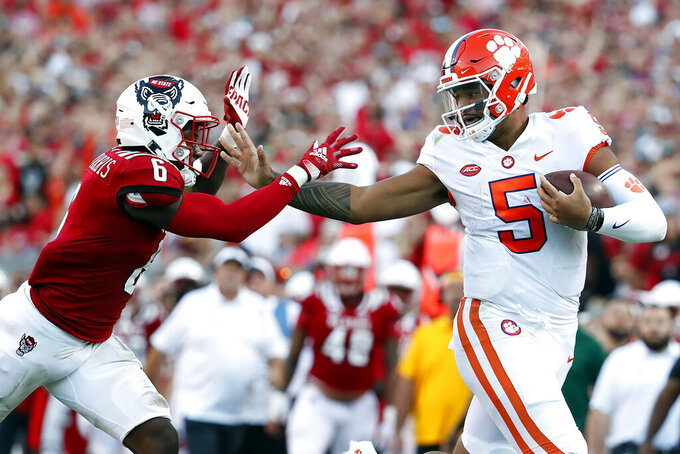 CLEMSON, S.C. (AP) — The early warning signs at Clemson have turned into a desperate call for help for the 25th-ranked Tigers.

The team which opened at No. 3 in the preseason has lost twice in September for the first time since 2014 — all but ending its bid for a seventh straight berth in the College Football Playoffs.

The Tigers (2-2, 1-1 Atlantic Coast Conference) were also runaway favorites for a seventh consecutive league title. Instead, they're no longer the team-to-beat in the Atlantic Division race after a 27-21 double overtime loss at North Carolina State t his past Saturday.

“All the goals are still on the table," Clemson offensive coordinator Tony Elliott said Monday. “But, obviously, we need a little help.”

The Tigers play Boston College (4-0), which begins ACC play at Clemson on Saturday night. The Eagles are coming off a 41-34 overtime victory against Missouri of the Southeastern Conference.

Tight end Davis Allen believes Clemson can bounce back quickly, no matter the hole they've dug for themselves.

“No one is used to having two losses, but we can't worry about playoffs right now,” Allen said. “As long as we put our head down and continue to work, we look up and we're 10-2. Who knows what can happen?”

That seems a stretch at the moment, given Clemson's struggles on offense and mounting list of injuries to key players on both sides of the ball.

The Tigers are last in total offense and 13th out of 14 teams in scoring in the ACC, categories they dominated the previous three years. Clemson led the league in points scored, averaging 43 or better a game from 2018-2020.

Clemson has averaged 226 yards and 12.6 points in its three games against FBS teams.

The Tigers latest loss also cost them two starters: defensive tackle Bryan Bresee and tailback Will Shipley. Bresee, last year's ACC defensive rookie fo the year, will miss the rest of the season with a torn ACL. Shipley is a freshman who's risen to starting running back and will miss about a month with a leg injury.

Shipley's absence adds to an already depleted tailback group after Lyn-J Dixon chose to transfer earlier this month after falling to third string on the depth chart. Dixon was Etienne's primary backup the previous three years and had gained 1,420 yards in his Clemson career.

Pace will likely get the bulk of the work against Boston College. Elliott was asked if anyone reached out to Dixon about changing his mind and returning to the Tigers.

“Not to my knowledge,” he said.

Whoever plays against BC will face a team still angry about its showing here in 2020 as it took an 18-point lead into the second half before falling to Clemson 34-28. That comeback was engineered by Tigers quarterback D.J. Uiagalelei filling in with Lawrence out due to COVID-19.

Uiagalelei hasn't been the same poised leader he was in his two starts a season ago. The 20-year-old sophomore, though, remains confident in his play. Yes, he's made mistakes, but said he's working hard to fix the problems.

“We haven't found it yet,” Uiagalelei said of offensive rhythm. “But we've got to keep digging.”

Elliott hears the criticism and believes his players have the character to work through their issues. He sees a group out of synch early on with one or two players making key mistakes at the wrong times that have held the Tigers back from how they've played the previous few years.

“I don't think we're at the point where it is what it is yet,” Elliott said. “But we've just got to continue to get the right pieces in place.”