Unranked Michigan enters season with chip on its shoulder 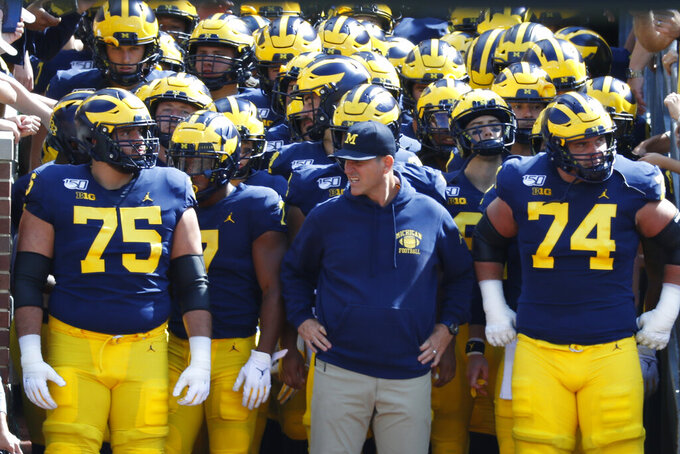 FILE - Michigan head coach Jim Harbaugh waits to lead the team on the field before an NCAA college football game against Army in Ann Arbor, Mich., in this Saturday, Sept. 7, 2019, file photo. Jim Harbaugh and the Michigan Wolverines are looking forward to a fresh start, opening against Western Michigan at home, after a two-win, pandemic-shortened season.(AP Photo/Paul Sancya, File)

College football's winningest program is coming off a rough season, even by pandemic standards. Michigan won just two games, lost four and had three canceled due to a COVID-19 breakout.

And in recent seasons, the team with the winged helmets and rich tradition has lost luster and relevance nationally as losses against better teams — particularly against rival Ohio State — have piled up.

The Wolverines will open the season unranked in The Associated Press college football poll on Saturday against Western Michigan at the Big House, where they were winless in 2020.

“There’s a much bigger chip on our shoulder as a team," receiver Mike Sainristil said Monday. “We have a lot to prove. I feel like regardless wherever we are, whether it’s rankings or however people view us, I just feel like we’re underdogs for some reason."

Perhaps that's because as an underdog in six years under Harbaugh, Michigan is 0-11.

While that mark won't get tested as a heavy favorite against the Broncos, it likely will on the night of Sept. 11 against No. 20 Washington and it probably will again against the fourth-ranked Buckeyes at home to close the regular season.

At least for starters, the Wolverines are going with redshirt sophomore Cade McNamara at quarterback. He beat out highly touted freshman J.J. McCarthy for the job as the returning player expected.

“I didn't doubt it," McNamara said.

McNamara took the first snap of the team's last game — a loss to Penn State in late November — and he played in three other games as a backup. He was 43 of 71 for 425 yards with five touchdowns and no interceptions.

“Last season was very upsetting," McNamara said. “I got hurt in the last game, which really my first, like, real start. That was obviously very frustrating. Everyone’s aware of what happened last season and I think we’ve done enough, this offseason to for sure, set up a season that’s going to be different."

Michigan will have a new look on defense, but no one in maize and blue is willing to say too much about how Mike Macdonald's scheme will be different from Don Brown's blitz-heavy, man-to-man preferences.

Harbaugh said he has tested the 34-year-old Macdonald, who was an assistant for his brother, John, and the Baltimore Ravens, by creating game-like situations that were unscripted in advance in recent practices.

Macdonald was part of a coaching staff turnover, including bringing back former Michigan players Mike Hart and Ron Bellamy. Players, motivated to turn the team around, look and sound as if they're even more excited for the season to kick off than they were in the past.

“So far the energy has been different this season," McNamara said. “I’m sure a lot of players can attest to that."

“One thing that’s been consistent has been the energy of our team, the enthusiasm of the club," he said. “I think that’s been generated by both the coaches and the players.”

Harbaugh, though, is all too aware that offseason buzz and spirited practice do not always lead to successful seasons.