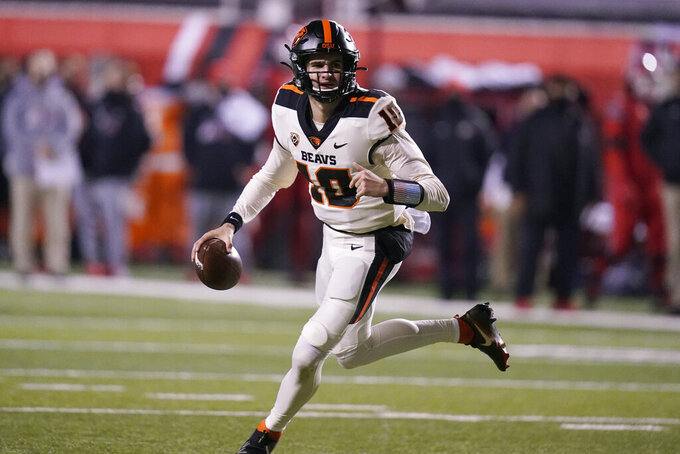 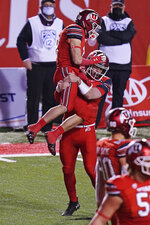 SALT LAKE CITY (AP) — Utah has found a new star at running back.

Ty Jordan ran for a career-high 167 yards and a touchdown to help Utah survive a late rally and beat Oregon State 30-24 for its first win of the season.

Jordan, a true freshman, totaled 129 yards rushing in his first two games. He added 22 yards receiving Saturday while getting 29 total touches on offense. His vision and breakaway speed have allowed him to emerge in a crowded backfield after only a few games.

“He’s like a little rock,” receiver Britain Covey said. “If I were a recruiter, the first type of player I would recruit is someone like Ty Jordan.”

Jordan has gained confidence with each game. He has already made enough strides that Utah coach Kyle Whittingham declared him as the team’s lead back after only three games at the FBS level.

“I feel really prepared,” Jordan said. “I have a great coach. I have great running backs around me that I can just learn from and bounce ideas off of and talk with.”

Chance Nolan threw for 202 yards and a touchdown and added 36 yards rushing in his first career start. It wasn’t quite enough for the Beavers (2-3, 2-3 Pac-12) to overcome a sluggish start on offense.

The Beavers cut a 20-point deficit to six on Kolby Taylor’s 21-yard catch between two defenders with 5:07 left. Oregon State had a couple of chances to drive for a go-ahead touchdown. Nate Ritchie stopped Tyler for a 1-yard loss on 4th-and-1 at the Utah 31 to end the first threat. The Utes were forced to punt with 1:16 left, but Nolan’s fourth-down pass to Luke Musgrave fell incomplete with 21 seconds remaining.

“We’re gonna fight for four quarters,” Beavers coach Jonathan Smith said. “I respect the effort and competitiveness of our outfit. But we got to execute better to win games.”

Utah gained only 21 yards in the fourth quarter and went 3-and-out or turned the ball over on downs on three straight drives to open the door for Oregon State to rally.

“We just got too vanilla and too nonimaginative,” Whittingham said. “That was awful to have three 3-and-outs in a row when we could have put the game on ice.”

Utah leaned on explosive running from Jordan to take control in the first half. Jordan piled up 81 yards and a touchdown on 10 carries before halftime. His touchdown, a 1-yard plunge off a long draw play on 4th-and-goal, put the Utes up 16-3 late in the second quarter.

Oregon State seemed lost on offense with starting quarterback Tristan Gebbia and top running back Jermar Jefferson both sidelined. The Beavers found some temporary footing when Calvin Tyler scored on a 1-yard run to narrow Utah’s lead to 16-10 just before halftime.

The Utes started to wear down Oregon State’s defense with their run game in the third quarter. Utah ran 10 times during a 14-play, 89-yard drive ending in an 8-yard touchdown catch by Covey that extended its lead to 23-10 midway through the third quarter. The Utes averaged 7.4 yards per carry on the drive including three runs of 9-plus yards.

Covey returned a punt 64 yards less than a minute into a fourth quarter to put Utah up 30-10.

Oregon State: The Beavers never got on track in any phase of the game until the fourth quarter. Oregon State converted just one third down in the first three quarters. Defensively, the Beavers allowed Utah to run all over the field and control the tempo of the game for long stretches.

Utah: Generating offense in the red zone proved to be a chore for the Utes. Utah settled for field goals on each of the team’s first three drives. It made the game much closer than it needed to be down the stretch. The Utes scored on five of their first six drives and punted just once in the first three quarters.

Covey saw his first extended action of the season after redshirting a year ago while rehabbing from an injury. He showed a small flash of what made him one of Utah’s most electrifying playmakers during his first two seasons.

The redshirt junior’s fourth quarter punt return for Utah’s final touchdown highlighted an effort that saw him also make four catches for 54 yards and a touchdown. They were Covey’s first receptions of the season.

“I don’t even know if words can express how frustrating injuries have been for me,” Covey said, noting he felt fully healthy in a game for the first time since 2018. “Being healthy makes the biggest difference. I can’t even explain it.”