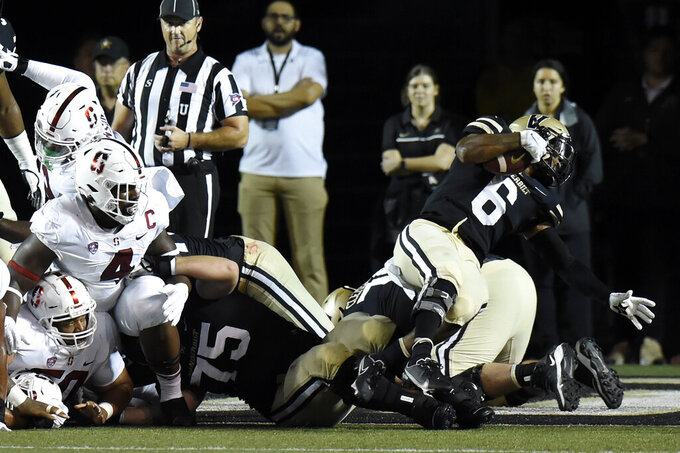 Vanderbilt running back Re'Mahn Davis (6) spins around as he runs for a touchdown against Stanford in the first half of an NCAA college football game Saturday, Sept. 18, 2021, in Nashville, Tenn. (AP Photo/Mark Zaleski)

NASHVILLE, Tenn. (AP) — Vanderbilt running back Ra'Mahn Davis will have season-ending surgery to repair a torn toe ligament on his right foot.

Coach Clark Lea confirmed Davis' injury Tuesday, saying they consulted with doctors Monday night. That's when Davis posted on social media that he would miss the rest of the season.

“I hurt for Ra," Lea said. "He's battled through some nicks just all season. I'm anxious for him to obviously be a part of this Team one and continue to help us in the manner he can. And he's a smart player, so he'll be like another coach on the field.”

Davis watched the second half of last week's 41-23 loss to Stanford from the sideline with his right foot in a walking boot. He led the team with 44 carries for 211 yards and scored his first touchdown in the loss to Stanford before leaving the game.

This leaves sophomore Rocko Griffin Jr. atop the depth chart as Vanderbilt (1-2) prepares for its Southeastern Conference opener hosting No. 2 Georgia (3-0, 1-0) on Saturday. Griffin ran for a career-high 109 yards against Stanford.