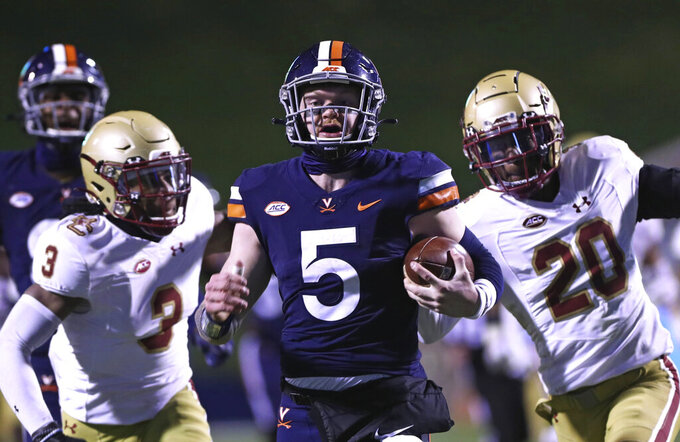 Virginia and Virginia Tech find themselves in a more familiar place amid this unpredictable year in college football: ending the regular season against each other.

The game Saturday night at Lane Stadium comes nearly three months after their attempt to open the season against each other was postponed because of COVID-19.

Much has changed since then as the teams are heading in opposite directions.

Virginia Tech (4-6, 4-5 Atlantic Coast Conference), whose COVID outbreak forced the Sept. 19 postponement, won three of its first four games and climbed to No. 19 in the Top 25. But since that stretch, the Hokies have lost five of six, raising questions about coach Justin Fuente’s future.

Virginia (5-4, 4-4) won its opener, then hit a rough patch and lost four straight. The Cavaliers have rebounded, winning their last four and they beat the Hokies last season, ending a 15-year string of losses in the series.

Cavaliers coach Bronco Mendenhall doesn’t think much of that factors in this week.

“I can’t speak and won’t speak for Virginia Tech, but I think one of the values of having a rivalry game at the end of the season is motivation,” he said. “And regardless of how your season has gone, there’s always that game.

'This year, maybe more than any, as you look around college football, I think there’s some teams that are just treading water and trying to make it to the finish. Others have something to look forward to and are excited for another opportunity because of a specific opponent," he said.

“We’re not in a great state at the moment, but we have a chance to go feel really good after this game Saturday,” Hewitt, a fifth-year senior, said. “It’s our big game, if not probably the biggest game of the year going into every year, playing UVA. It’s if you can’t get up, just the simple fact that you’re playing UVA, you’re in the wrong spot.”

Reed, a graduate transfer from Youngstown State, only joined the Hokies this season but it hasn’t taken long for teammates to share with him the importance of winning back the Commonwealth Cup that had been a fixture at Virginia Tech for so long.

“It’s been a long season and obviously hasn’t been going the way we wanted it to, but we still have one more shot to get after these guys we don’t like a lot,” he said.

Some other things to watch when Virginia plays at Virginia Tech:

First-year starter Brennan Armstrong has gotten better each week, both as a passer and running threat, and last week against Boston College became the first Cavaliers quarterback with 400 total yards in consecutive games. The Hokies used three quarterbacks in their 45-10 loss to No. 4 Clemson when Hendon Hooker had issues with the cold and Braxton Burmeister was injured, forcing Fuente to use redshirt freshman Knox Kadum. All three appear ready to go against Virginia, Fuente said this week.

The Hokies rank 11th nationally with an average of 238.9 rushing yards. Much of that comes from graduate transfer Khalil Herbert, who has 1,020 yards in 10 games, but Hooker has been prolific as well with 620 yards and nine touchdowns. The Cavaliers are 26th nationally, allowing 125.9 rushing yards, but 127th out of 127 teams in passing yardage allowed, yielding and average of 314 yards. The Hokies allow 265.9 (102nd).

Nothing highlights a rivalry more than crowd noise, which typically is the proverbial 12th man for the home team. Virginia's coronavirus guidelines currently allow only 250 people to attend football games, even in a stadium that can seat more than 65,000.

The Hokies opened the season missing 20 or more players for their first two games, many because of the coronavirus, and while Virginia has done a very good job of keeping infections down, they were without several key players against Boston College.

“I think what I underestimated is the constant state of uncertainty and adaptability necessary to get to this point,” Mendenhall said. “And quite frankly, I think most teams and most coaches around the country, you’re coaching a different roster each week.”

Hewitt said he was “enraged” by watching film of last year’s game, especially when the coaching staff picked out clips clearly showing that the Cavaliers played harder. “There’s no way that they can play harder than us in our stadium. It just can’t happen,” he said.

Here are some things to watch when Virginia plays at Virginia Tech: