Williams, No. 7 USC brace for raucous crowd at No. 20 Utah 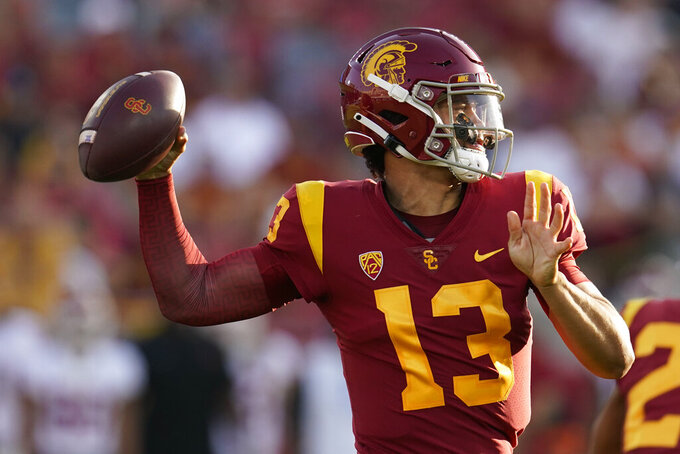 Caleb Williams found a critic that's hard to please — himself.

Evaluating his performance six games into his Southern California career, the quarterback felt that he’s played "all right.”

“I feel like I can play a lot better,” said Williams, who transferred in from Oklahoma to join USC coach Lincoln Riley. “I don’t feel like I’ve unlocked everything that I can do in my ability. I’m trying to get to that because this team needs my best throughout this last stretch of the season.”

A win over the Utes at raucous Rice-Eccles Stadium will put the Trojans in the driver’s seat in their bid to reach the Pac-12 title game. Their only remaining contest against a ranked conference team will be at No. 11 UCLA on Nov. 19 (No. 12 Oregon isn't on the schedule this season).

“It will be a fun atmosphere,” Riley said of playing at Rice-Eccles, where the Utes have won 11 straight. “We need to operate a little more clean. We think we’ll be ready to do that. ... It’s part of playing great road football.”

Before the season, it looked like Utah might be undefeated at this point of the season. After all, the Utes were picked as the top squad in the Pac-12 media poll. They lost the season opener at Florida and last weekend at UCLA.

Riley became the first USC coach to start his debut season at the school 6-0 since Jess Hill in 1951. It doesn’t hurt to have a quarterback like Williams, who’s thrown 14 touchdowns and run for another three. It doesn’t hurt, either, to have offensive playmakers such as receiver Jordan Addison (32 catches for 479 yards and six TDs) and running back Travis Dye (571 yards rushing and six scores).

“Football is a process. You’ve got to get better,” Williams said. “So me not being at my best just proves that I just need to do more.”

It’s easy to see why USC defensive lineman Tuli Tuipulotu was the league’s defensive player of the week. He had four tackles for loss and three sacks, including two in three plays in the first quarter.

“I’ll do whatever the team wants me to do, so we can get the job done,” Tuipulotu said. “It doesn’t matter how many plays I'm making as long as we're winning.”

The Utes are trying to make tight end Dalton Kincaid a bigger factor in the offense. He had four catches for 67 yards against UCLA.

“Other teams are very aware of him,” Whittingham said. “They do a good job trying to cover him and trying to take him away. But he’s one of our best weapons and he does need more targets."

Utah's last home loss was Nov. 21, 2020, against Southern California, with no noisy fans packing the stands due to COVID-19 protocols. In that contest, Cameron Rising made his first start for Utah but left with a shoulder injury that ended his season.

Count Riley as a big fan of Rising, who has 13 touchdown passes.

“Cool kid,” Riley said. “I’m excited for his career and how it’s gone and how it will go after this.”

This game features the league’s best two pass defenses. The Utes are holding teams to 179.3 yards passing, while the Trojans are at 198.8.

“We’ve gotten back to more man coverage, where we had a departure from that (in the) previous season,” Whittingham explained. “We do need to get more pressure on the quarterback.”