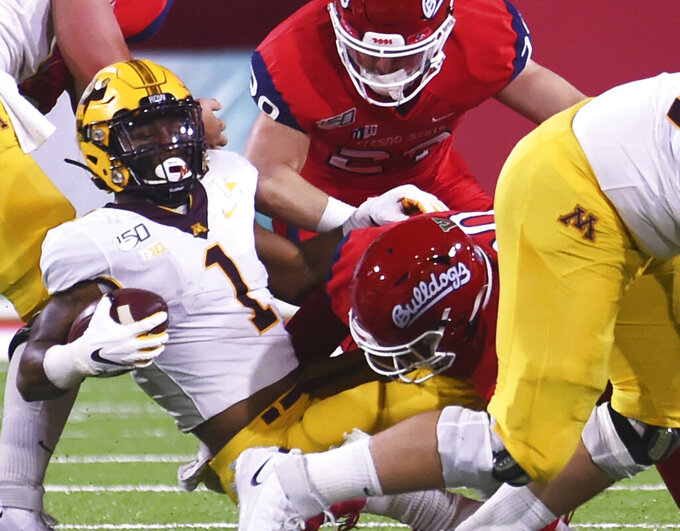 Winfield intercepted a pass in the end zone in the second overtime to preserve Minnesota's 38-35 come-from-behind victory over Fresno State on Saturday night with his second game-sealing interception in as many years against the Bulldogs.

The Golden Gophers (2-0) tied the game twice late with Tanner Morgan throwing a 20-yard TD pass to Chris Autman-Bell on fourth down in the final minute of regulation and Morgan then scoring on a 4-yard keeper in the first overtime.

Michael Lantz then made a 37-yard field goal for the Gophers on the opening possession of the second overtime before Winfield intercepted Jorge Reyna's pass to Cam Sutton to send Fresno State (0-2) to the loss.

"When that ball was floating in the air, I saw (Winfield) breaking on it and we all knew what was going to happen," Morgan said. "He's a big-time player and he made a big-time play in a big-time situation."

This was the second straight week Fresno State lost on a late interception in the end zone, with Reyna throwing one last week in a 31-23 loss at Southern California.

"It was there," coach Jeff Tedford said. "A little too much air on the ball but I don't think there was anything wrong with the call. We just didn't execute it the way we need to. Just something we saved for this game if we got into that situation so unfortunate it didn't work out."

It was there. A little too much air on the ball but I don't think there was anything wrong with the call. We just didn't execute it the way we need to. Just something we saved for this game if we got into that situation so unfortunate it didn't work out

The overtime followed a roller-coaster fourth quarter that started with Minnesota tying the game on Mohamed Ibrahim's 1-yard run early in the quarter. Fresno State went back ahead on Reyna's 2-yard run with 5:58 remaining following a muffed punt by Demetrius Douglas.

But the Gophers weren't done, surviving two fumbles on the drive to tie the game at 28-all with 46 seconds remaining on Morgan's pass to Autman-Bell.

"We just ran a quick slant and go," coach P.J. Fleck said. "That was our only shot. He hadn't had a touchdown yet in a year and a half and here it is. It couldn't have come at a better time."

The teams then traded touchdowns in the first overtime with Reyna throwing a 5-yard TD pass to Ronnie Rivers a play after a roughing the passer penalty extended the Fresno State drive.

Morgan then answered with a 4-yard keeper that tied the game at 35.

Morgan threw for 234 yards and two touchdowns. Ibrahim and Rodney Smith ran for scores for the Gophers.

Minnesota: It hasn't been easy but the Gophers have opened the season with back-to-back wins to extend the nation's longest nonconference winning streak to 17 games. Minnesota rallied in the fourth quarter to beat FCS-level South Dakota State 28-21 in the opener and came back to win on the road against a tougher Fresno State team in Week 2.

Fresno State: The Bulldogs have started the season 0-2 for the first time since 2014 by losing to Power 5 teams in Southern California and Minnesota. Fresno State hasn't been outclassed in either one. The Bulldogs nearly mounted an impressive comeback at USC last week before Reyna threw a late interception in the end zone with his team driving for the potential tying score. Fresno State then couldn't stop the fourth-and-13 play against Minnesota.