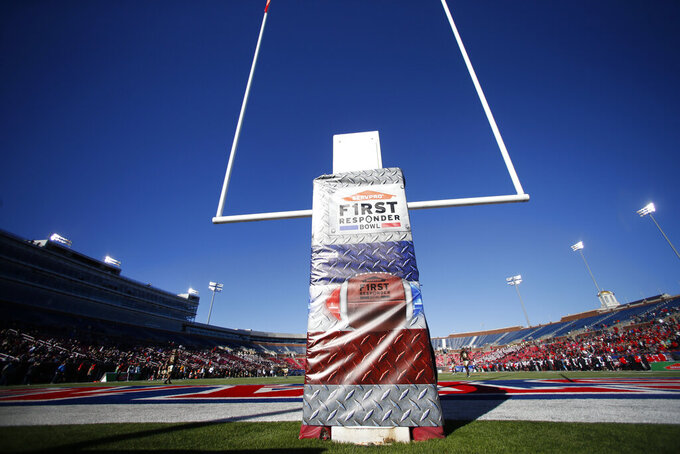 FILE - The First Responder Bowl logo is displayed on the goalpost during the NCAA college football game between Western Kentucky and Western Michigan in Dallas, on Dec. 30, 2019. A study by The Institute for Diversity and Ethics in Sport (TIDES) at Central Florida reported that the overall Graduation Success Rate (GSR) for bowl-bound teams had increased to 81.3%, up from 78% for 2020. Yet the racial gap fell as the average GSR for Black athletes rose from 73.4% in 2020 to 78% this year while white athletes remained steady at 89.7%. (AP Photo/Roger Steinman, File)

Line: Appalachian State by 4, according to FanDuel Sportsbook.

Western Kentucky QB Bailey Zappe has thrown for 5,545 yards and 56 touchdowns this season, putting him well within reach of the FBS records in both categories. Texas Tech’s B.J. Symons threw for 5,833 yards in 2003; LSU’s Joe Burrow passed for 60 touchdowns in 2019. Appalachian State is seeking to finish a seventh consecutive season with a bowl win. Since 2015, only Alabama — aided by the College Football Playoff — has more bowl wins (9) than the Mountaineers.

It’s very simple: Zappe vs. the Appalachian State secondary. Western Kentucky has thrown for more than 400 yards seven times this season and for at least 300 in 12 of its 13 games. Appalachian State hasn’t allowed any team to throw for more than 295 yards since 2019. The Mountaineers enter bowl season ranked 12th nationally in pass defense efficiency, while no team has thrown for more yards than Western Kentucky.

Appalachian State: QB Chase Brice has thrown for 3,020 yards this season, the fourth player in school history to break the 3,000-yard milestone.

Western Kentucky: WR Jerreth Sterns might be the best receiver that not enough people have heard of this season. His numbers are absurd: 137 catches, 1,718 yards, 14 touchdowns.