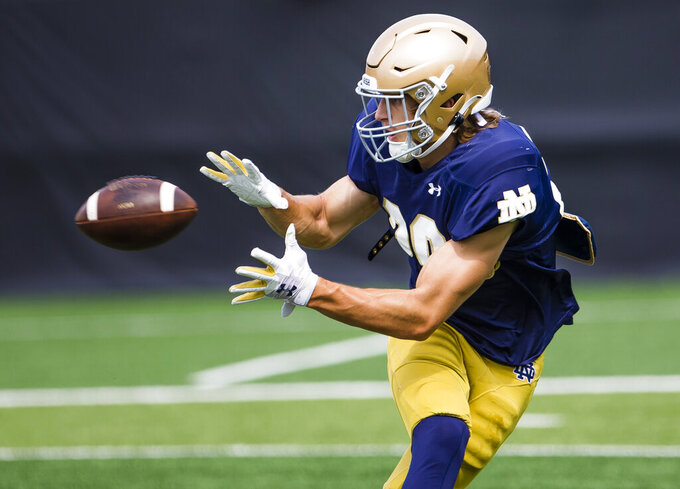 The preseason AP Top 25 is all about hope and optimism.

Reality Check is all about, well, being realistic. Sometimes the truth can be painful.

As has become tradition, the first AP Top 25 Reality Check of the season is a reminder that your promising college football team, newly minted with a cool ranking as it heads into the season, might turn out to be not as good as you and the poll voters thought.

Alabama is No. 1, followed by Oklahoma, Clemson and Ohio State in the poll presented by Regions Bank and released Monday.

Even in an anything-but-normal 2020 season played through the pandemic, the number of teams that started the season ranked only to finish unranked was a typical 10.

What was unusual about last season was the number of flameouts that came from the upper half of the preseason Top 25.

Over the last 11 seasons, 17 teams that started the season ranked in the top 10 finished unranked, just 1.5 per season. But last year, three top 10 teams — and five among the top 12 in the preseason rankings — did not finish the season ranked, led by 2019 national champion LSU, which was No. 6 going into last season.

As expected, most of the preseason ranked teams that fail to make the final Top 25 come from the bottom of the rankings. Teams ranked 21-25 in the preseason make up 27% of the teams (28 total) that finished unranked.

To put it another way, a little more than half the teams that started the season ranked between 21-25 from 2010-20, finished unranked.

At the top of the poll? Only seven preseason top-five teams over that span have failed to be ranked somewhere in the final Top 25.

How likely is your team to be one of the disappointments?

Reality check: The Crimson Tide have not finished ranked lower than 10th the last 13 seasons. There is no reason to believe this season's defending champion is vulnerable to an LSU-type tumble.

Reality check: The Sooners have their most balanced team in years, with a quality defense to go with Lincoln Riley's usual potent offense. For whatever it's worth: Twice in the last 12 seasons (2009 and '14) Oklahoma has been a preseason top five team and finished unranked.

Opener: vs. No. 5 Georgia in Charlotte, North Carolina, Sept. 4.

Reality check: The Tigers are on a six-year run of top four finishes and haven't finished unranked since 2010. Coach Dabo Swinney's team has lost one ACC game since October 2017 and it's to a team (Notre Dame) that is not in the conference this season.

Reality check: The Buckeyes have finished unranked just once since winning the national title in 2002, and have 16 top-10 finishes over that span. Coach Ryan Day has yet to lose to a Big Ten opponent in 16 games.

Reality check: The Bulldogs have been recruiting like the perennial playoff teams ranked in front of them and have four straight top-seven finishes under Kirby Smart. Georgia is a better bet to break its four-decade national title drought than to tank and finish unranked.

Reality check: Heading into Jimbo Fisher's fourth season as coach, all signs are pointing in the right direction for the Aggies. But A&M has only finished the season ranked five times this century and hasn't had consecutive top-10 finishes in 27 years.

Reality check: This whole ranked in the top-10 thing is new and different to the Cyclones. Iowa State finished last season ranked for just third time in program history. Can Matt Campbell's program continue to outperform its DNA?

Reality check: The Bearcats have finished ranked each of the last three seasons under coach Luke Fickell, improving each season. They're loaded for another run in the American Athletic Conference, with nonconference games at No. 17 Indiana and No. 9 Notre Dame likely to determine just how high they can go in 2021.

Reality check: Coach Mack Brown tries to make it two straight seasons with a ranked finish for the Tar Heels. That hasn't been done in Chapel Hill since the final two seasons of Brown's first stint at UNC in 1996-97.

Reality check: There has been a lot of buzz around the Ducks because of the way coach Mario Cristobal has been recruiting, but Oregon has finished a season ranked just once in the last five years.

Reality check: In two of the last three seasons, Wisconsin started ranked and ended unranked. It's happened a total of four time to the Badgers in the previous 13 seasons, but the last time Wisconsin went two straight seasons finishing outside the Top 25 was 2003.

Reality check: Coach Dan Mullen has brought some consistency with three straight ranked finishes, a first for Florida since Urban Meyer left after the 2010 season.

Reality check: There are many ways to describe how underwhelming the Hurricanes have been since joining the ACC in 2004, but how about this? Miami has finished the season ranked just six times as a member of the ACC and never better than 11th.

Reality check: Since 2010, the Trojans have had four seasons that started ranked and ended unranked. Coach Clay Helton could have a hard time surviving another season at USC that doesn't live up to expectations.

Reality check: The Tigers became the first defending champions since Auburn in 2011 to finish the season outside the Top 25. There is talent for a bounce back in Baton Rouge.

Reality check: Coach Tom Allen's Hoosiers will try to become the first team in the history of the program to start and end the season ranked.

Reality check: In 22 seasons under Kirk Ferentz, the Hawkeyes have neither finished four straight seasons ranked, nor had three straight seasons that began and ended in the AP poll. Iowa can accomplish both of those this season.

Reality check: The Nittany Lions had a string of four straight Top 25 finishes snapped last year. There is reason to believe it was just a glitch, but a tricky early season schedule should reveal a lot.

Reality check: The Huskies seemed primed to settle into a perennial Top 25 team under coach Chris Petersen when they had three straight ranked finishes from 2015-18. Second-year coach Jimmy Lake is trying to prove the program's slip was small.

Reality check: Former Alabama offensive coordinator Steve Sarkisian takes over a program that for all the drama has finished ranked three straight seasons for the first time since a 12-year run under Mack Brown from 1998-2009.

Reality check: The Chanticleers will try to follow up their magical 2020 season by becoming the first Sun Belt team to begin and finish a season ranked.

Reality check: The Ragin' Cajuns will try to follow up 21 victories in the last two seasons by becoming, yes, the first Sun Belt team to begin and finish a season ranked.

Reality check: The Utes had a run of three straight seasons from 2014-16 in which they started the season unranked and finished ranked. Utah doesn't get undervalued quite so much anymore. Like a lot of Pac-12 teams, the Utes bring back a boatload of experienced players.

Reality check: The Sun Devils are ranked in the preseason for the first time since 2015. Arizona State has only had one season (2014) in the last 24 years that began and ended ranked.