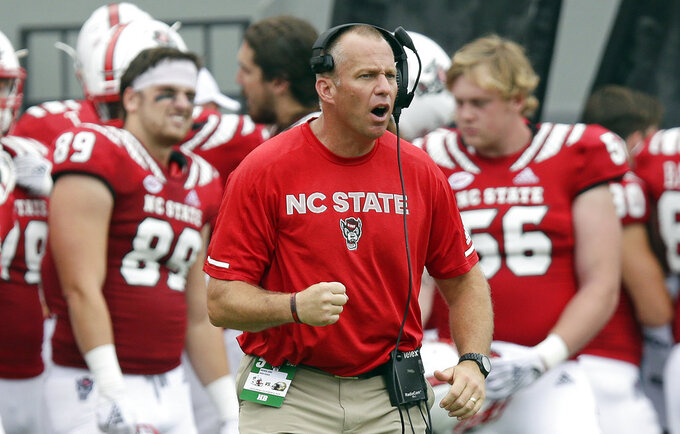 Texas has been losing the type of game it won on Saturday for nearly a decade.

The Longhorns since 2009 had mastered the excruciatingly painful loss as they tried to find their way back (that word!) to being nationally relevant and a legitimate contender in the Big 12.

No need to even discuss whether Texas is back after a classic Red River Showdown .

The Longhorns are unquestionably better than they have been in years, with five straight victories that include romps against USC and TCU and then a wild victory against No. 7 Oklahoma in which they blew a 21-point fourth-quarter lead but did not completely crumble.

Starting with the last couple seasons under Mack Brown, through three seasons under Charlie Strong and in Tom Herman's first season as coach, Texas has so rarely made the last, decisive play in a close game. So many slipped away and so many seemingly good wins were followed up with bad losses.

The Sooners were the first of three top-eight teams to lose Saturday, including No. 5 LSU and No. 8 Auburn.

Texas is now set to be interesting for the rest of the season. Next week the Longhorns host Baylor and after a week off the Longhorns go to Oklahoma State. November starts with a visit from No. 9 West Virginia, the Big 12's last unbeaten team and currently tied with Texas at the top of the conference. The Mountaineers have a loaded November schedule, including a finale at home against Oklahoma. Don't be surprised if TCU has a say in this, too.

The Big 12 race to finish 1-2 and play in the conference championship game has a chance to be wild if not ideal for producing a College Football Playoff participant. And it will most definitely include Texas as more than just a spoiler.

No. 5 LSU joined the Sooners as a previously unbeaten team.

The Tigers lost a slugfest at No. 22 Florida . The magic wore off LSU quarterback Joe Burrow, who threw the first two interceptions of his career in the last two minutes of the game.

Dan Mullen and the Gators, along with No. 13 Kentucky, are leading a revival in the SEC East that could make No. 2 Georgia's anticipated march to the division title much tougher than expected. Thanks to Florida's victories against Mississippi State and LSU, the SEC East is 3-1 against the West after Kentucky's OT loss at Texas A&M.

Unbeaten Georgia goes to LSU next weekend. The Bulldogs take a week off after Death Valley before getting Florida in Jacksonville, and then go to Kentucky on Nov. 3.

Consider for a moment, on the same day Alabama plays at LSU, the biggest game in the SEC could be Georgia-Kentucky for first in the SEC East.

No. 6 Notre Dame pulled away from No. 24 Virginia Tech at Lane Stadium in what could very well be the last time the Fighting Irish play against a ranked team this season. The Irish were 1-10 on the road against ranked teams since 2013.

Their remaining opponents have a combined 17-16 record. But the last five weeks could still be a problem for the Irish, who play only once in South Bend after next week's game against Pitt. Following an open date on Oct. 20, Notre Dame plays Navy in San Diego, then at Northwestern and against Florida State at home. Then they go to New York to play Syracuse at Yankee Stadium before the finale at Southern Cal.

N.C. State has been a team that teases a bit and then sort of fades away. Even last season, when N.C. State had by far its best team of coach Dave Doeren's tenure — four NFL draft picks along the defensive line — but the Wolfpack managed only 9-4 and No. 23 in the country.

This year's team looks sneaky good, with quarterback Ryan Finley working with one of the best groups of receivers in the country, highlighted by Kelvin Harmon. The Wolfpack had a home game against West Virginia canceled because of Hurricane Florence. Unfortunate, because it denied both teams a good measuring stick and resume builder.

N.C. State is off next week before visiting Clemson on Oct. 27 in a game that could decide the ACC Atlantic. The Wolfpack has played Clemson tough the last two seasons, pushing the Tigers to overtime in Death Valley in 2016.

N.C. State will get another chance for a breakthrough victory and Harmon and the rest of those big and talented receivers should be a headache for Clemson's secondary.

With LSU, Oklahoma and Kentucky losing, there are now 11 unbeaten teams in FBS. Eight ranked teams lost Saturday. ... Nothing in college football swings like the mood of Auburn fans. Their Tigers are either a national championship contender or their coach should be fired after an ugly loss . The current coach just signed a 7-year, $49 million contract ... Shenault for Heisman! Laviska Shenault Jr. scored all four of No. 21 Colorado's touchdowns , two on the ground, two through the air, as the Buffaloes remained unbeaten with a win against Arizona State ... No. 17 Miami rallied to beat Florida State , proving turnover chain turnover backpack ... Without its starting quarterback and running back, San Diego State beat Boise State , which probably killed the Broncos' chances of reaching a New Year's Six bowl. SDSU's Rocky Long might be the most undervalued coach in the country. ... Looking for a running back to emerge in the Heisman race? Clemson's Travis Etienne is up to 761 yards and 11 touchdowns after ripping through Wake Forest . The sophomore is averaging 9.2 yards per carry. ... Beware Iowa State with a third-string quarterback in the state of Oklahoma. The Cyclones knocked off No. 25 Oklahoma State behind freshman Brock Purdy. Last season it was Kyle Kempt leading the Cyclones past the Sooners. The difference? Purdy, a three-star recruit from Arizona, looks like a player coach Matt Campbell can build his program around.