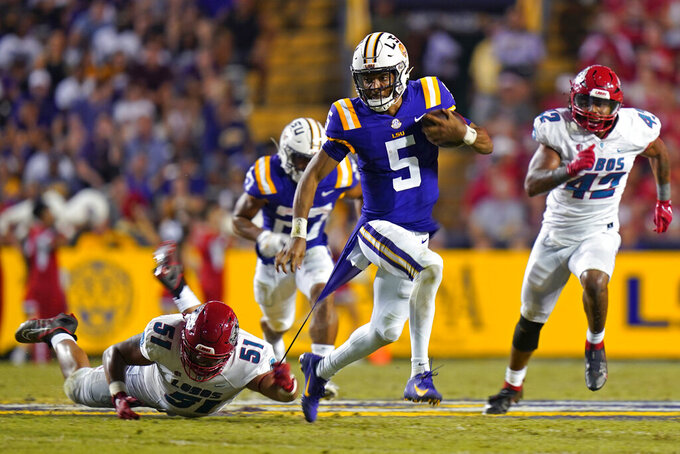 Line: LSU by 8 1/2, according to FanDuel Sportsbook.

Embattled Auburn coach Bryan Harsin could use a big win after narrowly escaping Missouri thanks to a goal-line fumble in overtime. The heat on him ratcheted up after a 41-12 loss to Penn State. Auburn produced only a combined nine points in the second halves of those two games. LSU is seeking its fourth straight win and can improve to 2-0 in the SEC. First-year LSU coach Brian Kelly makes only his third venture into an SEC stadium and first of this season. The first two came with Central Michigan and Notre Dame.

LSU's defense is coming off its first shutout since 2018, holding New Mexico to 88 total yards and two first downs in a 38-0 win, which came one week after the Tigers held Mississippi State's “Air Raid” offense to 16 points. Auburn's offense has sputtered badly even before the shoulder injury to quarterback T.J. Finley. LSU is giving up just 257.8 yards a game, ranking 12th nationally. Auburn's offensive average of 376.8 yards ranks 89th.

LSU: WR Kayshon Boutte returns after missing the New Mexico game following his son's birth. Boutte torched Auburn for 99 yards on the opening drive last season, including a 31-yard touchdown one play after the offense lost 22 yards on a fumble. Boutte finished the game with 127 yards on six catches.

Auburn: RB Tank Bigsby hasn't been a huge factor in the last three games, totalling 134 yards on 41 carries, an average of 3.3 yards. He opened with a 16-carry, 147-yard, two-touchdown effort against Mercer. New starting quarterback Robby Ashford needs to be able to lean on Bigsby and Jarquez Hunter in the running game.

The home team has won 18 of the last 22 meetings. The four games from 2016-19 were decided by a total of 14 points. ... Auburn won in Baton Rouge last year for the first time since 1999, thanks to a late 92-yard touchdown drive. ... LSU is trying for a fourth straight game with 200-plus yards rushing. LSU hasn't done that since opening the 2015 season with seven in a row. ... Arkansas transfer safety Joe Foucha will make his LSU debut. He started 33 games for the Razorbacks, with 231 carrer tackles and five interceptions. ... LSU QB Jayden Daniels left last week's game with a minor back injury but is expected to play.