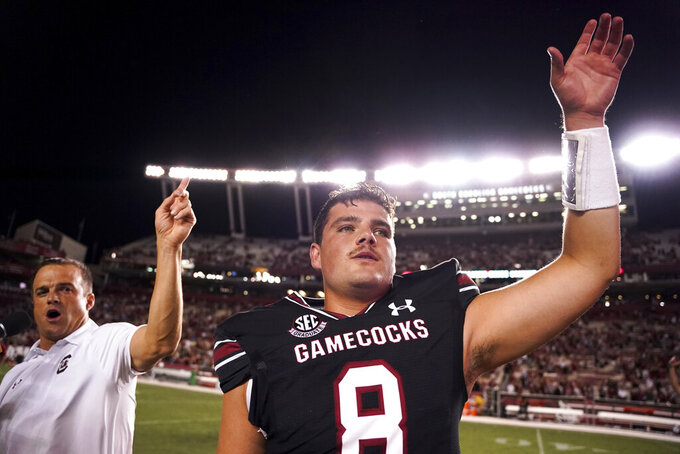 That's nearly impossible after the Gamecocks moved to the edge of postseason eligibility with their 40-17 stunner over Florida. Beamer's program, picked for next-to-last in the SEC East, has a chance to move into the top half of the division when it heads to Missouri (4-5, 1-4 Southeastern Conference) on Saturday.

Beamer believes, though, it's not the time to contemplate that critical sixth victory — and first bowl appearance since 2018. Beamer is looking to become the third straight coach, after Steve Spurrier and Will Muschamp, to make a bowl in his debut season at South Carolina (5-4, 2-4).

He addressed the topic with his players Tuesday, telling them bluntly, “Every time you think about being bowl eligible, stop.”

Putting the focus on win No. 6, Beamer explained, means there's a cap on what the Gamecocks can achieve this season. There's two home games left once they finish at Missouri, against No. 16 Auburn on Nov. 20 and Clemson, which has a six-game winning streak in the in-state rivalry, to close the regular season on Nov. 27.

The Gamecocks' defense picked up a fumble-recovery TD and held Florida's potent run game, which came in among the top 10 in the country, to just 82 yards. It was the first time this season Florida was outgained by an opponent.

That's heady stuff for a team that was pounded 44-14 at Texas A&M in its previous outing.

Beamer acknowledged he's on alert for players thinking the Gamecocks permanently have turned a corner.

“The same people that are telling you how great you are and all that stuff are probably the same people who wanted you benched last week,” Beamer told his team.

Muse is grateful for the excitement around the program after its signature win. “When you do that, excitement is going to be everywhere,” he said. “But you've got to be level-headed.”

Beamer has seen the steadiness over the team's first two practice days for Missouri. The same effort his players put in before Florida is evident again.

Tailback Marshawn Lloyd said the Florida victory was a boost the Gamecocks can feed off of down the stretch.

Beamer said Brown, an FCS transfer from St. Francis (Pa.), will get the start at Missouri. Graduate assistant-turned-quarterback Zeb Noland has continued progressing from knee surgery on his right meniscus two weeks ago and could also be available.

Brown showed a steadiness behind center and an elusiveness to escape Florida's defense and keep critical plays alive and the attack moving.

And all without thinking too much about what may lie ahead.

Beamer understands his players are thrilled at where they are after hearing so often what they couldn't accomplish. But if they want to go further, they must stay true to their season-long process.