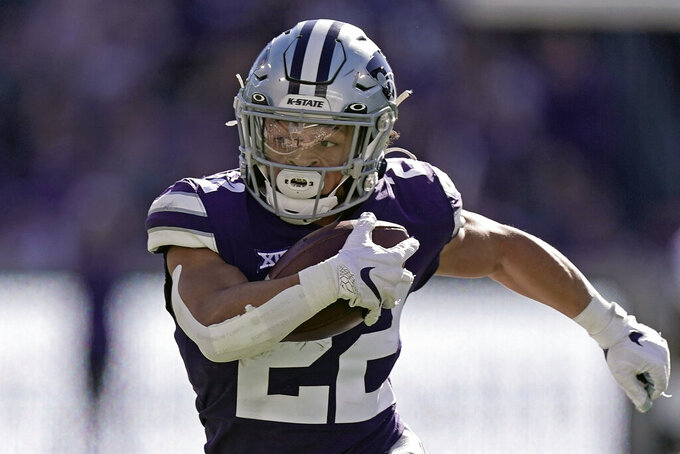 FILE - Kansas State running back Deuce Vaughn runs the ball during the first half of an NCAA college football game against TCU, Saturday, Oct. 30, 2021, in Manhattan, Kan. The Big 12 will begin its 27th season this week with some uncertainty of what will stand out offensively since there are three new head coaches and plenty of different skill players. (AP Photo/Charlie Riedel, File)

New TCU coach Sonny Dykes saw a drastic shift in Big 12 offenses during his first stint in the conference in the early 2000s.

Now that he's come back, he sees the times are a-changin' still.

“Man, it's changed. ... When I got in the league, it was a two-back power league. And by time I left the league, it was everybody being Air Raid,” said Dykes, a Texas Tech assistant from 2000-06. “And then I think at some point there’s been an adjustment that’s happened since then.”

The Big 12 will begin its 27th season this week with some uncertainty about what will stand out offensively since there are three new head coaches and plenty of different skill players, including at least seven new starting quarterbacks. There are also some pretty good defenses.

There are still plenty of Air Raid concepts in the Big 12, and throughout the rest of the country. The 10-team league also has power backs such as preseason AP All-American pick Bijan Robinson at Texas, dual-threat backs like Kansas State dynamo Deuce Vaughn and Iowa State still planning to utilize multiple tight ends.

“The Big 12 is not the Big 12 of five years ago,” said new Texas Tech coach Joey McGuire. “You look at what Iowa State has done running the football in 12 and 13 personnel, what Baylor did last year in 11 and 12 personnel.”

Oklahoma led the Big 12 in scoring the last six seasons. When Lincoln Riley left to become Southern Cal's new coach, the Sooners hired Brent Venables, the co-defensive coordinator of their 2000 national championship team who had since been part of two national titles as the DC at Clemson.

“I think it's important that as we get into our inaugural season that we'll create a baseline and then we'll build from there,” Venables said. “It's not going to be what I just left at Clemson, but it wasn't that way when we got there in 2012 either. You develop that through a lot of work, a lot of players believing in what you're doing.”

Ole Miss led the Southeastern Conference in total offense the past two seasons with Lebby as offensive coordinator, after he had similar success at future Big 12 team UCF.

Kittley was OC last season at Western Kentucky, which averaged 535 yards and 44 points a game, after big numbers at Houston Baptist the previous year. He was also at Tech with Kliff Kingsbury from 2013-17, going from a student assistant to graduate assistant and then assistant QBs coach in a span that included Patrick Mahomes as the Red Raiders starter.

“It gives us a true identity on offense, and it's going to strain some people,” said McGuire, who before the past five years on Baylor's staff was coach at a Texas high school that won three state championships.

Baylor and Oklahoma State, with the league's top two defenses, made the Big 12 championship game last December. The Bears won 21-16 with a fourth-down stop just short of the end zone in the final minute

“That game was decided by literally two or three inches,” Dykes said. “I just think that's the league right now. I think there’s a lot of really good teams in the league and a lot of teams that I think have a chance to win it. I think it’s probably as open as any league in college football.”

Texas has Robinson (114.9 yards rushing per game, 11 TDs) and also returns receiver Xavier Worthy (Big 12-best 81.8 yards receiving per game, 12 TDs). But the Longhorns also have one of the new starting quarterbacks in Quinn Ewers, a still-unproven top recruit who transferred back to his home state after spending last season at Ohio State.

“He has now become a magician in our offense. He knows it. He can run it fast. He understands," Cowboys coach Mike Gundy said of Sanders. “We want him to relax and enjoy the season. Have fun and go out and play good football.”