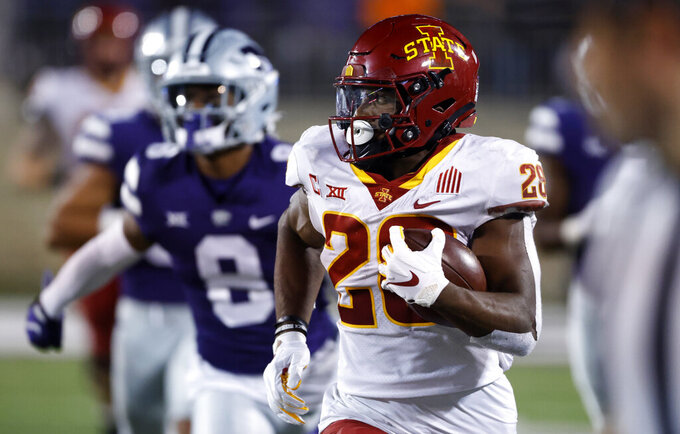 Iowa State running back Breece Hall (28) rushes for a first down as he is chased by Kansas State defenders during the fourth quarter of an NCAA college football game on Saturday, Oct. 16, 2021, in Manhattan, Kan. (AP Photo/Colin E. Braley)

Some things to watch in Week 8 of the Big 12 Conference:

No. 8 Oklahoma State at Iowa State. While the Cowboys (6-0, 3-0 Big 12) have surprised many with their undefeated start, Iowa State (4-2, 2-1) was a Top 10 team at the beginning of the season before a notable home loss to Iowa and then falling at Baylor in their Big 12 opener. The Cyclones could still get back in position to make their second consecutive Big 12 championship game. A win over Oklahoma State would provide a big boost. Both teams still have games remaining against third-ranked and six-time defending champion Oklahoma. While Oklahoma State has won five of the past six games against Iowa State, none of those games have been decided by more than seven points.

TCU and West Virginia meet for the 10th time since coming into the Big 12 together in 2012. Both had lopsided losses in their last game, but all other losses came in one-score games. The Mountaineers had extra time to prep, with an open date last week while the Horned Frogs (3-3, 1-2) lost 52-31 at No. 3 Oklahoma. West Virginia (2-4, 0-3) lost 45-20 at Baylor in its last game. The Mountaineers have won their last three games against TCU.

Texas Tech (5-2, 2-2) will try to win consecutive Big 12 games for only the second time in five years, and first time under third-year coach Matt Wells. The Red Raiders play at Kansas State (3-3, 0-3), which has lost its last eight conference games. That is the school's longest such streak since the Big 12 started in 1996. ... Iowa State RB Breece Hall has extended his Big 12 record to 18 consecutive games with a rushing TD, the longest active streak in the nation. ... Oklahoma has now had winning streaks of at least seven games in each of the last seven seasons. That broke a tie with the program-record six in a row by coach Bud Wilkinson's teams from 1953-58. ... There are already three bowl-eligible Big 12 teams: No. 3 Oklahoma, No. 8 Oklahoma State and No. 20 Baylor. Texas Tech is the only team with a chance Saturday to join them.

Oklahoma State running back Jaylen Warren has rushed for 659 yards in four games since becoming a starter for the Cowboys. The transfer from Utah State had 14 carries for 138 yards just in the fourth quarter and finished with 193 as the Cowboys rallied to win at Texas. That was his second-highest total this season. His 218 yards at Boise State in his first start are the most by a Big 12 player this season.