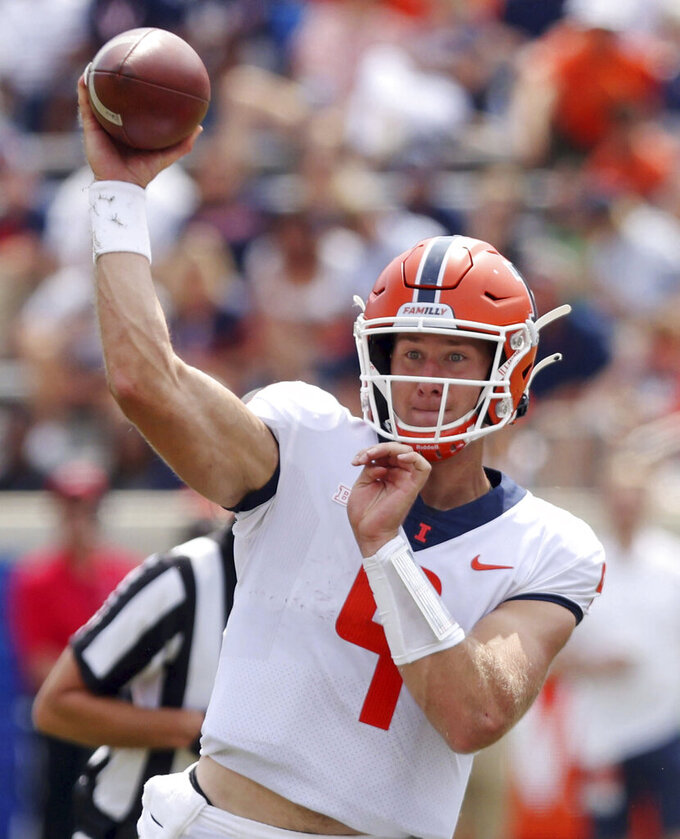 Purdue receiver David Bell used his Twitter account to tell fans he was all right after Saturday's scary scene at No. 12 Notre Dame.

It's still unclear when the Boilermakers could get their biggest playmaker back on the field.

Coach Jeff Brohm announced Monday that Bell is in the concussion protocol and his status for this weekend's Big Ten opener against Illinois remains unclear.

“He's the type of player that doesn’t have to practice a whole lot at all, other than making sure he’s feeling right and feeling good and in good condition, in good shape," he said. “So I think we’ll monitor that obviously extremely closely this week and hope to get him out there whenever he can go.”

Bell was injured when Fighting Irish safety Kyle Hamilton hit the Big Ten's 2019 Freshman of the Year in the back, driving him face-first into the ground. After Bell's head bounced hard off the field, he stayed down for several minutes before being carted off the field, looking woozy with his mouth bleeding.

Following the game, Purdue officials said the all-conference receiver was walking and surrounded by teammates.

Bell's status isn't the only injury concern for Purdue (2-1).

Starting running back Zander Horvath is expected to miss another three to seven weeks with a broken leg and Bell's backup, Mershawn Rice, will miss an indefinite amount after injuring his foot Saturday. Purdue also lost backup tight end Jack Cravaack with a season-ending knee injury and defensive lineman DJ Washington is out indefinitely with an injured toe. They're also without top cornerback Cory Trice (ankle) for another two to four weeks.

Brohm also fielded questions about whether a quarterback change could be forthcoming. Aidan O'Connel replaced starter Jack Plummer in the fourth quarter.

“Jack Plummer will be our starter," he said. “Like every game, we will have the ability to play multiple quarterbacks and we won’t hesitate to do that."

The Fighting Illini (1-3, 1-1 Big Ten) are facing their own quarterback controversy.

Brandon Peters returned for Friday's loss to Maryland, his first action since getting hurt in a season-opening win over Nebraska. Former Rutgers quarterback Artur Sitkowski was named the conference's offensive player of the week after replacing Peters against the Cornhuskers, then threw three TD passes in a loss to UTSA. He struggled in a loss to Virginia before losing the job to Peters last week.

“There was a thought when the 2-minute situation came up where Art was at, but BP has been pretty good in those scenarios," first-year coach Bret Bielema said Friday when asked if he considered making a change. “Obviously, we didn't convert the way we wanted. We can't a sack in those situations, you've got to get rid of the ball."

The bigger issue for the the Boilermakers will be figuring out who will be available for Plummer or O'Connell.

“We’ll continue to take him (Bell) through the process and hope he gets better each and every day," Brohm said.