Clemson at No. 23 Pitt highlights ACC action this week 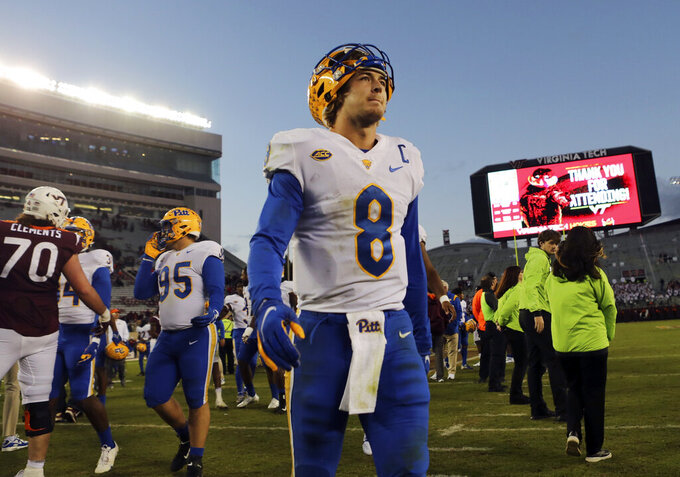 Here are things to watch in the Atlantic Coast Conference in Week 8:

Clemson (4-2, 3-1) at No. 23 Pittsburgh (5-1, 2-0). It marks the first time in the brief series history — it's tied 2-2 — that Clemson will face Pitt on the road. It's a key cross-division matchup that features the ACC's highest-scoring offense against the league's best scoring defense. The Panthers lead the Coastal Division and Clemson, unranked by the AP for the third straight week, is in the hunt for the Atlantic Division crown despite a double-overtime loss at North Carolina State last month. Pitt is 5-1 for the first time since head coach Pat Narduzzi’s debut season in 2015, when it started 6-1, and tops the ACC in scoring at 48.3 points per game. Clemson is last in the conference in scoring at just over 20 points per game but is second nationally in scoring defense, yielding an ACC-low 12.5 points. Five of Clemson’s six games this season have been decided by seven points or fewer.

The Georgia Tech defense against Virginia's high-powered offense. The Yellow Jackets boast one of the nation's best group of linebackers. Quez Jackson ranks first in the ACC in tackles (10.2 per game), Ayinde Eley is third (9.2), and Charlie Thomas ninth (7.8). They'll try to derail an offense that's averaging 405.9 yards passing, second nationally, with quarterback Brennan Armstrong at the controls. The Cavaliers (5-2, 3-2) lead the nation with 189 first downs and enter the game with the most passing yards in the country (2,841) and have 3,683 yards of total offense, second in college football. Virginia has won 12 of the last 14 meetings with the Yellow Jackets at Scott Stadium.

Miami (2-4, 0-2) is just a 2.5-point underdog against No. 18 NC State (5-1, 2-0), according to FanDuel Sportsbook, and the Hurricanes are at home. The Wolfpack, behind only Wake Forest in the Atlantic Division, travel to Miami for the first time since 2012. Since Miami became a member of the ACC in 2004, the teams have played each other just five times, but all have been close with an average margin of victory of 7.4 points. Miami won last year, 44-41.

Pitt quarterback Kenny Pickett has thrown 21 touchdown passes against only one interception. His TD pass total ranks fourth in the nation and first in the ACC, and he needs just 14 completions to eclipse the all-time school record of 867 set by Alex Van Pelt from 1989-92. Pickett also is averaging 23.83 completions per game, second in the ACC, is third nationally in pass efficiency (181.8 rating), fifth in total offense (352.3 ypg), and has been responsible for 144 points, fourth in the country. The Panthers have gained more than 400 yards offensively in all but one of their six games.

Place-kicker Nick Sciba of No. 16 Wake Forest ranks as the most accurate kicker in NCAA history midway through the season. He's made 24 straight field goals, the longest active streak in the nation, and has only missed seven kicks — 69 of 76 for 90.5% — in his college career. He's never attempted a 50-yarder but is 19 of 20 from 40-49 yards with a long of 49. Sciba also holds the school record with 359 points, 12th in ACC history.