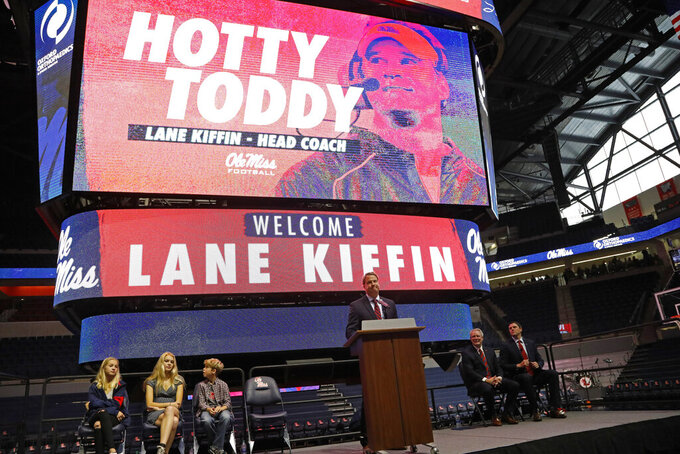 FILE - In this Monday, Dec. 9, 2019, file photo, Lane Kiffin speaks to Mississippi fans after being announced as the new head football coach during a introductory press conference in Oxford, Miss. In attendance were his children, daughters Presley Kiffin, 13, left, Landry Kiffin, 15, second from left, and son Knox Kiffin, 10. Mississippi State's Mike Leach and Mississippi's Lane Kiffin brought big names and offensive pedigrees to the Magnolia State. But they drew huge challenges for their debuts, with the Bulldogs visiting defending national champion and No. 6 LSU and the Rebels hosting No. 5 Florida. (AP Photo/Rogelio V. Solis, File)

The Southeastern Conference is set to kick off its 10-game, league-only schedule, making this Saturday the most normal-feeling yet of a most unusual season.

As of Wednesday, all the SEC openers were still on. The Big 12 and Atlantic Coast Conference were also scheduled to have all their teams playing this weekend — until Tuesday, when Notre Dame and Wake Forest was postponed because of a COVID-19 outbreak among Fighting Irish players.

The first week of the SEC season features the debuts of four new coaches, including Lane Kiffin at Mississippi taking on No. 5 Florida and Mike Leach at Mississippi State visiting defending national champion and No. 6 LSU.

Eight SEC teams begin the season ranked, but only two play each other Saturday. A sneaky good game between No. 23 Kentucky and No. 8 Auburn could determine just how seriously we need to take these teams as division contenders.

Wildcats vs. Tigers is one of three games matching ranked teams this weekend. With the Big Ten still a month away from starting its season — and the Pac-12 and Mountain West looking likely to follow in late October/early November — this is as normal as college football will get for while.

Tigers drew the Tide and LSU when the SEC revised its schedule. It's been nine years since Mizzou joined the conference but it's still tough to be the new guy ... ALABAMA 45-10.

First game as a head coach for Razorbacks' Sam Pittman comes against his last employer ... GEORGIA 35-7.

Red Raiders allowed 572 yards passing in its opener to Houston Baptist, albeit with a depleted team ... TEXAS 45-31.

Hurricanes have won three straight in the rivalry, which says a lot about how things have gone lately for the Seminoles because Miami has hardly been vintage Miami during that time ... MIAMI 28-21.

Knights have won four straight in the series and averaged 47 points per game ... UCF 45-24.

Black Knights have averaged more than 36 minutes of time of possession in two games ... CINCINNATI 24-17.

After having a game postponed, can the Cougars pick up where they left off at Navy? ... BYU 27-17.

Georgia Southern (minus 14) at No. 19 Louisiana-Lafayette

After failing to crack 26 points in any ACC game last season, Wolfpack put up 45 in their opening victory against Wake Forest ... N.C. STATE 24-20.

Tulane (minus 3 1/2) at Southern Mississippi — @GriffinTSmith

Cyclones are 3-8 against the Horned Frogs and looking for consecutive victories for the first time in the series ... TCU 24-20.