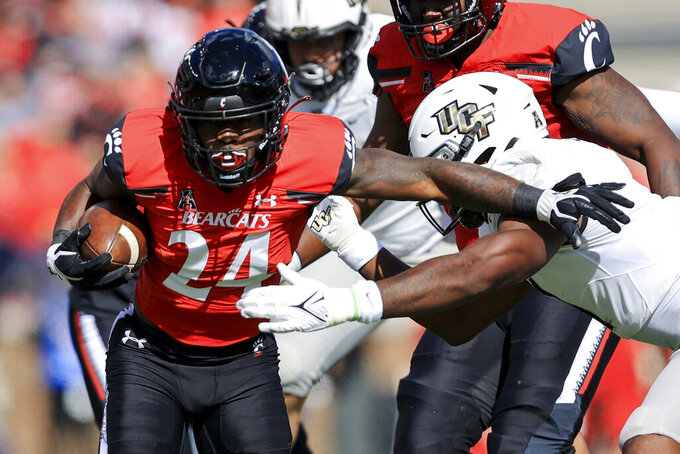 Cincinnati running back Jerome Ford (24) carries the ball as he breaks a tackle against UCF linebacker Jeremiah Jean-Baptiste, right, during the first half of an NCAA college football game, Saturday, Oct. 16, 2021, in Cincinnati. (AP Photo/Aaron Doster)

—Tyrion Davis-Price, LSU, rushed for school-record 287 yards and three TDs, and the Tigers’ banged-up defense produced four interceptions in a 49-42 victory over No. 20 Florida.

—Eric Barriere, Eastern Washington, threw for 600 yards and seven TDs in a 71-14 win over Idaho.

—Kobe Dillon, Southern, set a school record with 267 yards rushing on just 14 carries for three TDs and in a 34-7 win over Arkansas-Pine Bluff.

—Bryce Young, Alabama, threw for 348 yards and four TDs, and the No. 5 Crimson Tide rebounded from a loss to rout Mississippi State 49-9.

—Jerome Ford, Cincinnati, rushed for a career-high 189 yards and four TDs to help the No. 3 Bearcats roll past UCF 56-21.

—RJ Martinez, Northern Arizona, passed for 417 yards and five TDs in a 59-35 victory over Southern Utah.

—Aidan O’Connell, Purdue, threw for 374 yards and accounted for three TDs and the Boilermakers continued their recent mastery over No. 2 Iowa with a 24-7 win.

—Taylor Grimes, Incarnate Word, caught nine passes for 182 yards and a school-record four TDs in a 38-2 win over Nicholls.

—Malik Grant, Sacred Heart, ran for 183 yards and three TDs in a 27-17 win over Central Connecticut.

—Cole Kelley, Southeastern Louisiana, threw for 396 yards and five TDs in a 61-24 win over Houston Baptist.

—Jack Chambers, Charleston, threw for 357 yards and four TDs in a 35-5 win over Hampton.

The pressure, Purdue coach Jeff Brohm said, was all on No. 2 Iowa.

The Hawkeyes started the season with six consecutive wins and the program had ascended to its highest ranking since 1985.

The Boilermakers connected, just as they’ve been doing against the Hawkeyes in recent seasons.

Aidan O’Connell threw for 374 yards and accounted for three touchdowns, David Bell had a career-best 240 yards receiving, and Purdue continued its recent mastery over Iowa with a 24-7 upset.

The Boilermakers have won four of their last five games against the Hawkeyes. The loss ended Iowa’s 12-game winning streak, including nine consecutive in Big Ten play.

Facing a big early deficit on the road at Texas, Oklahoma State leaned on the two things that had kept the Cowboys undefeated so far: defense and a punishing run game that could grind out the final quarter.

Tanner Brown’s fourth field goal of the game gave the No. 12 Cowboys their first lead in the fourth quarter, and quarterback Spencer Sanders’ scrambling 10-yard touchdown run with 2:18 to play sealed a 32-24 victory as No. 25 Texas collapsed for the second consecutive game.

99_Yards of the TD run by Ohio's Armani Rogers against Buffalo, longest in NCAA history by quarterback.

363_Straight extra points Georgia had made before Jack Podlesny missed a PAT against No. 11 Kentucky. The streak is an NCAA record and involved six kickers.

837_Yards of offense by Eastern Washington in its 71-14 win over Idaho.