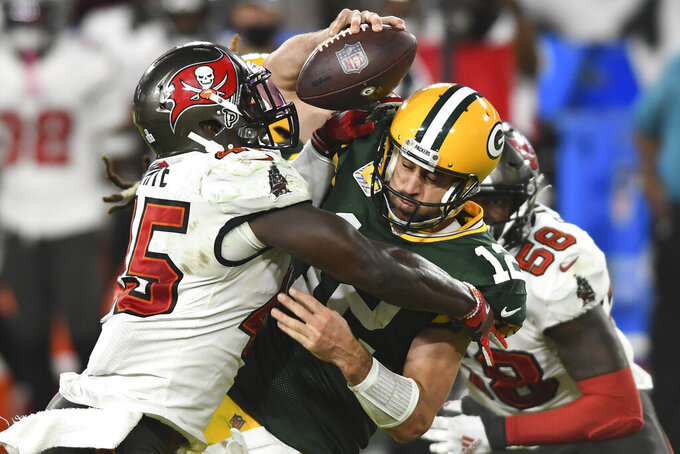 FILE - Tampa Bay Buccaneers inside linebacker Devin White (45) sacks Green Bay Packers quarterback Aaron Rodgers (12) during the second half of an NFL football game in Tampa, Fla., in this Sunday, Oct. 18, 2020, file photo. Rodgers had his worst game of the season in Green Bay’s 38-10 loss at Tampa Bay Back on Oct. 18, as he threw two game-changing interceptions and completed less than half his pass attempts. Rodgers gets a chance to make amends for that performance Sunday when the top-seeded Packers host the Bucs in the NFC championship game. (AP Photo/Jason Behnken, File)

NFL and college football and sturdy drama franchises including the “Chicago” shows on NBC and the “NCIS” group on CBS were among the week's ratings winners, according to Nielsen figures out Wednesday.

The second impeachment of now-former President Donald Trump drew viewers to news shows, but not in the numbers that tuned in the prior week to bear witness to rioting inside the U.S. Capitol and gave CNN get its biggest single-day audience ever.

CBS' news magazine “60 Minutes,” which included reports on the Capitol attack and security measures for President Joe Biden's inauguration, was the week's top non-sports broadcast despite competition from a NFL divisional playoff game.

That contest, between the Tampa Bay Buccaneers and the New Orleans Saints was the week's No. 1 program. It helped make Fox the most-watched network with an average 9.1 million viewers, followed by NBC with 6.4 million. CBS had 4.1 million, ABC had 3.5 million, Univision had 1.3 million, Telemundo had 1 million and Ion Television had 940,000.

ESPN was the most-watched cable network in prime-time, averaging 3.2 million for the week. CNN had 3.1 million, MSNBC had 2.7 million and HGTV had 1.1 million.

For the week of Jan. 11-17, the 20 most-watched programs in prime time, their networks and viewership: