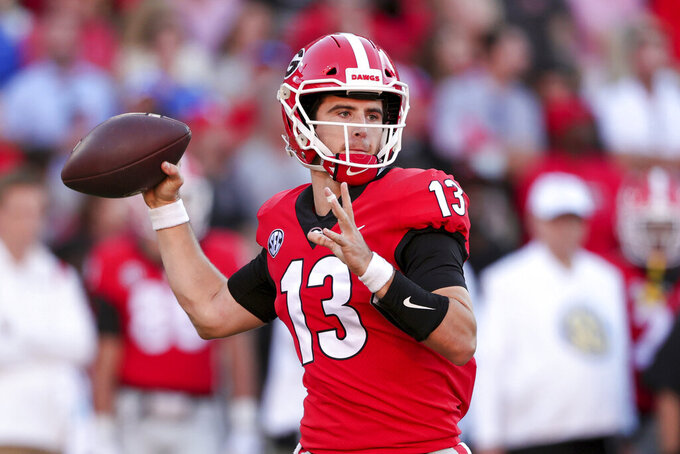 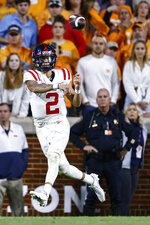 Georgia and Alabama could be heading for another showdown in the Southeastern Conference championship game.

Eight of the past nine Southeastern Conference championship games have featured either the Bulldogs or the Crimson Tide -- or both.

Halfway through the season Alabama and Georgia — which have met twice in Atlanta for the league crown since 2012 — are on course for to battle for title a third time.

The unbeaten Bulldogs (7-0) sit atop the Top 25 poll despite a key quarterback injury, while Alabama (6-1) is ranked fourth and holds pole position in the West Division.

There also have been some compelling developments at No. 15 Kentucky and No. 12 Mississippi, where success hasn’t come as often.

Wildcats coach Mark Stoops had fans in the Bluegrass State enjoying the best start to a season in more than 60 years before last weekend’s loss at Georgia.

“Our team knows we have a good football team. They know that we can compete and play better than we did" at Georgia, Stoops said this week, as his squad went into a bye week before its next game at Mississippi State on Oct. 30.

"They know they belong and we have to regroup,” Stoops added.

Meanwhile, Mississippi (5-1) is a contender in the West thanks in large part to quarterback Matt Corral, whose prolific production through the air and on the ground has made him a Heisman Trophy candidate – if he's healthy down the stretch.

His status is in doubt when the Rebels host LSU this week, but coach Lane Kiffin is effusive in his praise for how Corral has elevated his team.

“I’ve said it before: I hope our fans appreciate this guy,” Kiffin said. “I hope every home game is a sellout, because you ain’t got many times left to see this guy and he is a special, special player.”

Despite beating the Gators last weekend, the Tigers learned coach Ed Orgeron agreed to a buyout and will step down after this season. Florida coach Dan Mullen has work to do to avoid a similar fate.

The Associated Press writers covering the SEC voted on the best — and worst — of the league so far. Here are some of the standout teams and players heading into the season's second half:

Mark Stoops, Kentucky: Kentucky opened 6-0 for the first time since 1950 before last week’s 30-13 loss to No. 1 Georgia. Even so, the Wildcats remain on track for one of the best seasons in program history.

Matt Corral, QB, Ole Miss. Corral has accounted for 22 touchdowns in all. He's passed for 288 yards per game and has thrown for 14 TDs with only one interception. He also has rushed for 450 yards and eight TDs.

Jordan Davis, NT, Georgia. While three tackles for loss and 1 1/2 sacks aren't necessarily eye-popping, the 6-foot-6, 340-pound Davis' main job is to stuff the run and make opposing QB's uneasy by collapsing the front of the pocket. Georgia ranks second nationally in yards rushing allowed (63.6 per game), first in yards passing allowed passing (144.9 per game). Davis has had a considerable role in those team defensive rankings.

Brock Bowers, TE, Georgia. A foot injury to projected starter Darnell Washington early this season created an opportunity for Bowers' emergence. He leads the Bulldogs with 20 catches for 315 yards and four touchdowns. He also has rushed for a TD.

Kentucky. In most seasons, the Wildcats struggle against programs like Florida and LSU, but beat both in back-to-back weeks. Their victory over the Tigers came by three touchdowns.

Stetson Bennett, QB, Georgia. Filling in for injured starter JT Daniels, Bennett has passed for 10 touchdowns with no interceptions in four starts.

Florida. The Gators ranked 13th in the final AP poll of last season. They're now unranked after a 49-42 loss at LSU last week. Florida is 2-3 in SEC play, virtually eliminating them from contention in the East Division — which they won last season.

Dan Mullen, Florida. Mullen's struggles against LSU both this season and last might be the biggest reasons for this. Florida was heavily favored in both games, making both losses to their historical rivals that much less palatable to the Gator faithful. Mullen is in his fourth season at Florida and the Gators don't appear close to contending for their first College Football Playoff bid since the four-team format's inception in the 2014 season.

Christopher Allen, LB, Alabama; and Kayshon Boutte, WR, LSU. Allen was a preseason Butkus Award candidate for the top linebacker in college football. He had a sack and forced fumble in Alabama's season opening victory over Miami, but left the game with a season-ending foot injury. Boutte was on track to contend for the Biletnikoff Award and was tied for the nation's lead in touchdown catches with nine when he was lost for the season with an ankle injury two weeks ago.