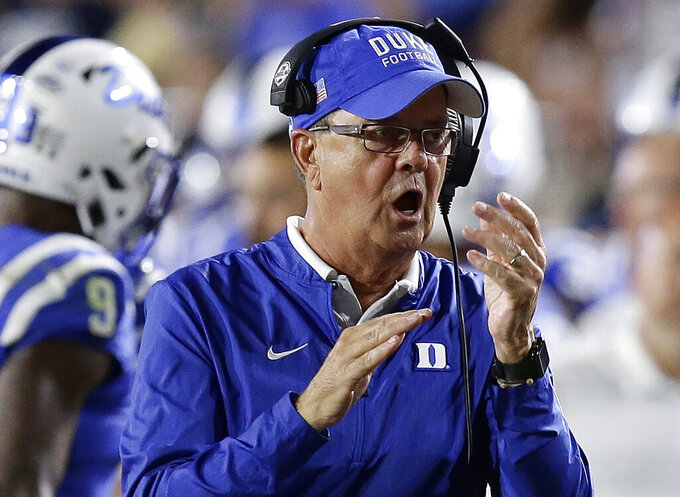 FILE - In this Saturday, Sept. 29, 2018, file photo, Duke head coach David Cutcliffe reacts during the second half of an NCAA college football game against Virginia Tech in Durham, N.C. Cutcliffe is taking over playcalling duties in hopes of helping the Blue Devils find an offensive spark in 2020 after struggling to some of their lowest totals under Cutcliffe the previous season. (AP Photo/Gerry Broome, File)

Duke coach David Cutcliffe knows the Blue Devils have to get more from their offense this season.

The Blue Devils are coming off a season that saw them post some of their lowest yardage totals in 12 seasons under Cutcliffe on the way to missing a bowl for only the second time in eight seasons. So the coach known for developing Peyton and Eli Manning in the college ranks has taken over play-calling duties to direct Duke’s hunt for an offensive spark.

“Offensively we’re going through some changes,” Cutcliffe said. “We’ve got a new coordinator that I hope I don’t have to fire. But we’ll see how that comes along.”

Offense generally hadn’t been a problem for the Blue Devils (5-7, 3-5 Atlantic Coast Conference) since Cutcliffe arrived in 2008, but last year’s attack ranked next to last in the league at 329.7 yards per game. That was the lowest total since Cutcliffe’s debut season, while the 179.3-yard passing average was the worst of his tenure.

It also didn’t help that Duke threw 14 interceptions, second only to Virginia’s 15 in the ACC.

Cutcliffe said he’s worked to find a balance between being a head coach and calling the offense.

“It’s a different relationship with players, meeting with the quarterbacks, spending time with the offense – and then trying to get my time in with the team,” he said. “I think I’m going to enjoy this. I better get my sleep because it’s going to be stressful and challenging physically.”

Some other things to know about Duke for the 2020 season:

Much of the attention in the quarterback battle has focused on Brice, graduated from Clemson in May. He’s best known for rallying Clemson from a fourth-quarter deficit to beat Syracuse in 2018 after starter Trevor Lawrence left with a first-half injury. Clemson went on to finish 15-0 and win a national championship.

“You’re not going to be perfect, so I learned that at an early age,” Brice said of the position battle. “So I just go out there and try to play fast. I think that’s what they’re trying to do too.”

Whoever wins the battle for starting quarterback will play behind an experienced line.

“I know it was a little difficult for me at first coming in being the new guy,” Hamilton said. “But since camp started … the chemistry has definitely grown. I’m excited to see what we do this year.”

Duke’s secondary looks like a strength with returning starters such as safeties Marquis Waters and Michael Carter II. The Blue Devils are hoping redshirt senior cornerback Mark Gilbert can provide another boost to that unit.

Gilbert, an Associated Press all-ACC first-team pick in 2017, suffered a season-ending hip injury after two games in 2018. He didn’t play last season while recovering from that injury, but has been practicing through preseason camp.

Linebacker Brandon Hill and long snapper Ben Wyatt had seen significant work before opting out for this season. Wyatt left after appearing in 38 games over the past three seasons while Hill had started six games last year.