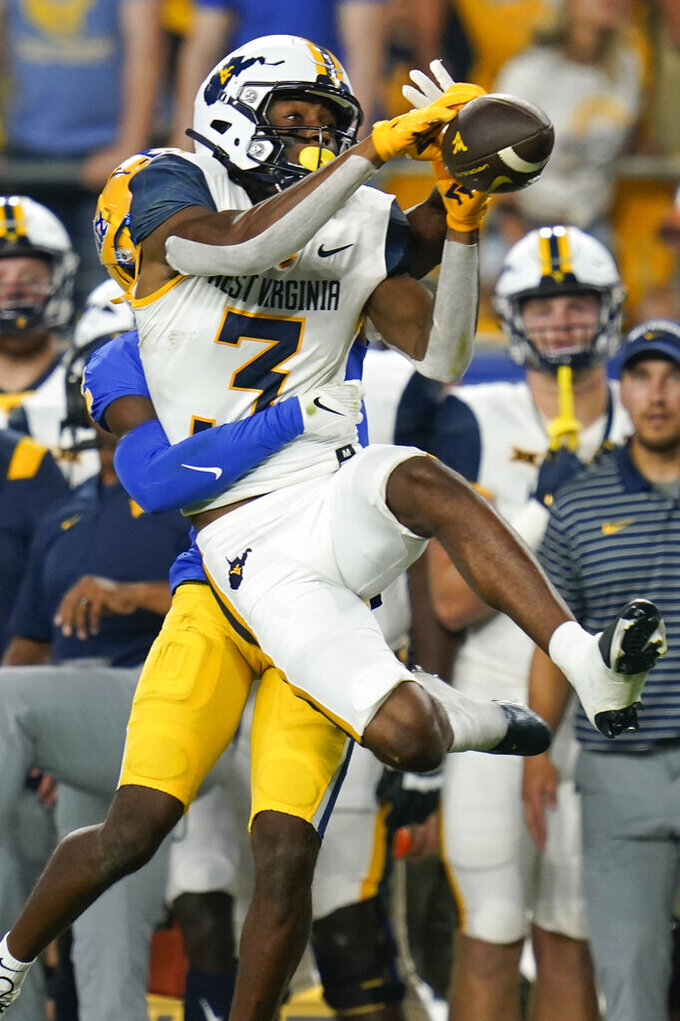 West Virginia wide receiver Kaden Prather (3) catches a pass for a first down against Pittsburgh defensive back M.J. Devonshire (12) during the first half of an NCAA college football game Thursday, Sept. 1, 2022, in Pittsburgh. (AP Photo/Keith Srakocic) 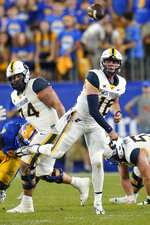 PITTSBURGH (AP) — Pittsburgh cornerback MJ Devonshire spent a portion of the summer watching highlights of old Backyard Brawls wondering what it might be like to make one of the iconic plays in a a series whose history stretches to the 19th century.

He doesn't have to wonder anymore.

Devonshire snagged a pass that caromed off the hands of West Virginia wide receiver Bryce Ford-Wheaton and raced 56 yards to the end zone with 2:58 remaining as the Panthers rallied for a 38-31 victory Thursday night in the return of the Brawl following a 10-year hiatus.

“This is one of the greatest rivalries in college football and I just did something crazy I'm going to get to tell my kids about," Devonshire said.

The Panthers had just tied it on a 24-yard touchdown pass from Kedon Slovis to Israel Abanikanda with 3:41 to go. Four plays later, West Virginia quarterback JT Daniels found a wide-open Ford-Wheaton only to see the ball smack of Ford-Wheaton's hands and settle into Devonshire's awaiting arms.

The Pittsburgh-area native who started his college career at Kentucky before coming home in 2021, felt his old punt returner skills come flooding back as he weaved his way through traffic to give Pitt its second score in 43 seconds to turn a seven-point deficit into a lead the Panthers wouldn't relinquish.

“I just knew I had to run as fast as I could,” Devonshire said.

The Mountaineers drove deep into Pitt territory in the final minute and Daniels hit Reese Smith on a fourth-down fling that appeared to bring the ball to the Pitt 1.

Briefly anyway. Replays showed the ball skimmed the turf before Smith could bring it in and the crowd of 70,622 — the largest to attend a sporting event in the city’s history — erupted.

“They've got a really good football team and I respect them a lot, I really do,” West Virginia coach Neal Brown said. “But we made a bunch of mistakes, too.”

Southern California transfer Kedon Slovis threw for 308 yards and a touchdown in his debut with the Panthers in the opener for both teams. Rodney Hammond ran for 74 yards and two touchdowns before leaving in the fourth quarter because of a right leg injury that appeared serious.

Daniels, looking to revive his career following stints at USC and Georgia, completed 23 of 39 passes for 214 yards with two touchdowns to Ford-Wheaton and the pick that Devonshire turned into Pitt's first victory over its longtime rivals since 2008.

The Mountaineers piled up 190 yards on the ground, but fourth-year coach Neal Brown didn't feel confident enough in his running game to go for it on fourth-and-1 at the Pitt 48 midway through the fourth quarter and his team up 31-24.

Daniels lined up in an effort to draw the Panthers offside and when he didn't, the Mountaineers punted.

Pitt didn't waste the opportunity. Slovis led the defending ACC champions 92 yards in seven plays, the last on a flip to running back Israel Abanikanda in which he slipped through three tackles for a 24-yard touchdown.

Brown said afterward he would punt again, pointing to the chance to give the Panthers a long field and the way West Virginia had stuffed Pitt on its previous series, sacking Slovis twice in the process.

“If I had to do it again, I would do that same decision,” Brown said.

West Virginia: Brown likely needs the Mountaineers to take a step forward in 2022 to engender a little job security. While Daniels definitely appears like an upgrade at quarterback, his coach continues to be snake-bit in tight games. His inability to trust an offensive line that held its own against a defensive front that expects to be among the best in the ACC if not the country was curious and ultimately, costly.

Pitt: The Panthers are aiming even higher than the ACC crown the claimed last winter. The schedule is user-friendly and while Slovis needed time to get warmed up, he did a fairly solid impression of former Pitt star Kenny Pickett, who helped unfurl the ACC championship banner he led the Panthers to in 2021 on his way to being a Heisman Trophy finalist and a first-round NFL draft pick.

The Panthers will stick in the poll for a second straight week and could rise a bit depending on results elsewhere this weekend.

West Virginia: The Mountaineers open Big 12 play at home on Sept. 10 against Kansas. West Virginia has won eight straight against the Jayhawks.