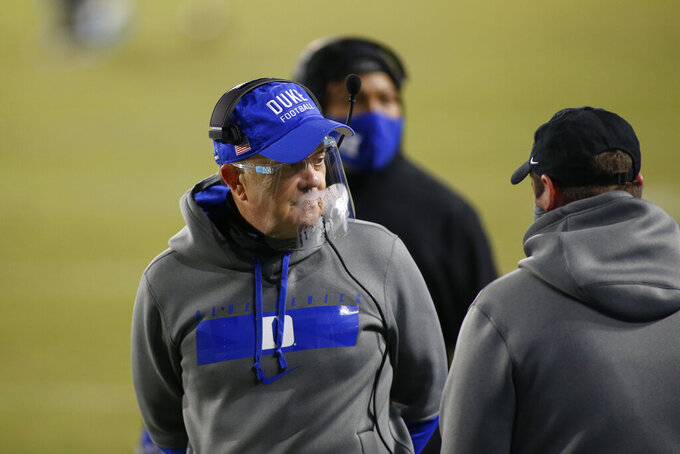 Duke coach David Cutcliffe stands on the sideline during the second half of the team's NCAA college football game against Miami on Saturday, Dec. 5, 2020, in Durham, N.C. (Nell Redmond/Pool Photo via AP)

Now both teams are looking to build some confidence for the future — and to get back on the field.

The Blue Devils (2-8, 1-8 Atlantic Coast Conference) suffered double-digit losses to North Carolina and Georgia Tech in November. There was also a Nov. 21 matchup with Wake Forest that was canceled and replaced by a visit from No. 9 Miami, which turned into last weekend’s 48-0 loss to open December.

“That’s probably been one of the toughest things of the past month,” Florida State coach Mike Norvell said. “We’ve had two or three different game plans that we went into weeks with and you see the preparation and build in the confidence of what you’re about to go do. And then not having the opportunity to execute that. It’s going to be big getting an opportunity to go do that on Saturday.”

Florida State will play its first game in nearly a month when the Seminoles host Duke. Both the Blue Devils and Florida State have dropped three straight games. They were originally scheduled to meet last weekend in Durham, North Carolina. But that plan changed as the league rescheduled games due to the coronavirus pandemic.

Duke hosted No. 9 Miami instead of the Hurricanes visiting Wake Forest, which had to pause team activities due to coronavirus issues. That led the ACC to push the Duke-FSU matchup back one week and move it to Tallahassee, Florida.

The Blue Devils have played just three games since Halloween. The chance to get back on the field and provide the seniors another game is a motivator for Duke coach David Cutcliffe.

“I think sweat helps,” Cutcliffe said. “It’s been a difficult time throughout the season, but they’ve answered the bell. One shot for our seniors, and that’s certainly a big part of the focus. Back to work.”

Some other things to watch when Florida State hosts Duke:

HISTORY ON FLORIDA STATE’S SIDE

Florida State has won all 20 meetings with the Blue Devils, including the Seminoles’ 45-7 win against Duke in the 2013 ACC title game on the way to winning the national championship.

Duke has struggled to protect the football all season. The Blue Devils have lost 19 fumbles and 16 interceptions this year. The 35 turnovers are the most in the Bowl Subdivision ranks and at least 11 more than any other FBS team.

The Blue Devils are coming off a 48-0 home loss to No. 9 Miami, which included Duke losing four fumbles and backup quarterback Gunnar Holmberg throwing an interception for five turnovers.

Opponents have converted 18 of those 35 turnovers into 110 points, including 14 touchdowns over 10 games.

Duke’s 48-0 loss to Miami marked the program’s first shutout loss since 2008 during Cutcliffe’s first season. But it also continued an alarming trend of major defensive struggles at the end of the schedule.

Florida State has been most successful with Jordan Travis at quarterback, using his legs (469 rushing yards, six rushing TDs) and arm to guide an improving ground attack. The Seminoles average 4.77 yards per rush this season but will be without tailback La’Damian Webb, who opted out for the final two games. Florida State will also lean on tailbacks Jashaun Corbin (65 carries, 340 yards, two TDs) and Lawrance Toafili (30 carries 239 yards, 1 TD).

Freshmen and sophomores make up 75 percent of Florida State’s roster. The Seminoles started eight freshmen, including four on the offensive line, in their last game.