Freeman guides No. 18 Notre Dame back from 0-2 start 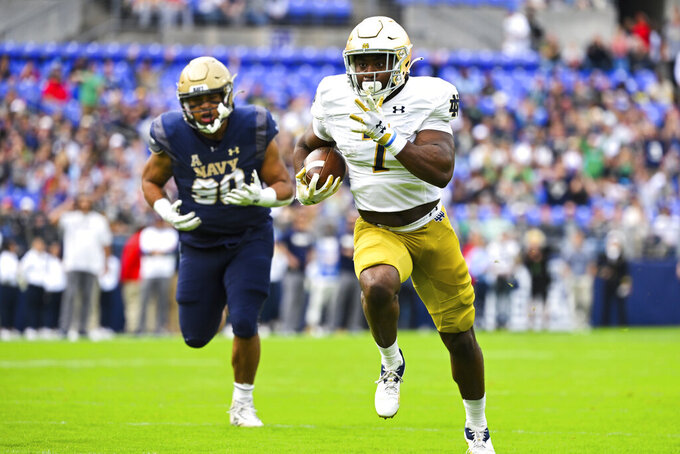 Notre Dame running back Audric Estime (7) runs the ball for a touchdown during the first half of an NCAA college football game against Navy , Saturday, Nov. 12, 2022, in Baltimore. (AP Photo/Terrance Williams)

Losing at No. 2 Ohio State was understandable. Losing the home opener to Marshall and sliding from preseason No. 5 to out of the rankings in the first two weeks of the season was not. And losing starting quarterback Tyler Buchner with a season-ending shoulder injury in Week 2 only made matters worse.

The Fighting Irish have responded to the precarious moment by winning seven of eight — all with a new quarterback, Drew Pyne.

“It could have unraveled after Marshall,” Pyne said.

While the Irish (7-3) are no longer in the College Football Playoff mix, they have reasserted themselves into the national conversation after dealing No. 13 North Carolina (9-1) and No. 9 Clemson (9-1) their only losses of the season. And it's helped resurgent Notre Dame jump back up to No. 18 in the AP Top 25.

Freeman turned things around, first by blaming himself for the early-season failures rather than calling out the players or coaches. It was a decision that earned the players' respect.

“I’m the first one to go up there and say, ‘Here are areas where I have to improve,’ ” Freeman said. “Every person in our program has to be transparent about that. The minute you start pointing fingers at players, you’ll lose them. The minute you just blame coaches for everything, you lose them.”

Freeman focused on getting the ground game going. In its first two games, Notre Dame averaged 15.5 points and 103.0 yards rushing, which ranked 110th of 131 FBS programs.

The problem? What was supposed to be a talented offensive line and a loaded tight end room, led by preseason All-Americans Jarrett Patterson and Michael Mayer, struggled to block effectively. So Notre Dame went back to the basics.

The Irish have rushed for 200 or more yards in five wins, including 263 against Clemson, which entered the game with nation’s No. 19 run defense.

“It’s been a little bit of an up-and-down season, to say the least,” said Mayer, one of the top tight end prospects in next April's NFL draft. “We’ve been working hard. We’ve kept our heads down. We’ve done what we need to do.”

Strong special teams units have helped, too. Notre Dame has blocked six punts in the past five games and is tied for the national lead in that category.

“It starts at the top,” special teams coordinator Brian Mason said. “Coach Freeman allows us on special teams to use some of our frontline players. We have some really good defensive players on the punt block team.”

Mainstays on Notre Dame’s top-30 defense, such as Jack Kiser, Clarence Lewis, and Bo Bauer, each have blocked a punt this season and preseason All-American defensive end Isaiah Foskey has two blocks.

Still, there have been too many letdowns.

The Irish lost 16-14 to struggling Stanford at home and were locked in a tight contest last weekend against Navy. But after back-to-back wins over ranked foes in Syracuse and Clemson, the Irish overcame an 18-yard offensive effort that netted one first down and zero points in the second half to hold off the Midshipmen, 35-32.

Freeman’s confidence never wavered and his humility provided a steadiness that helped Notre Dame find its way back.

“He’s the same guy every day,” defensive coordinator Al Golden said. “His approach with the players has been awesome. I think the players respect that. They respect his consistency, his appreciation, his gratitude toward them and the fact that he’s in the foxhole with them.”

Notre Dame closes out the regular season with Saturday's contest against Boston College (3-7) and a showdown with No. 7 USC (9-1) the following week.

Win or lose, Freeman continues to fervently chase improvement after learning the key to success isn’t following a perfect blueprint — it’s adjusting to the unforeseen missteps.

“If somebody said to me ′I’m going to be a first-time head coach. What should I do?’ " Freeman said. “I’d say, ’Be yourself. Work tirelessly but have a sense of urgency in everything you do.' You can’t just have a plan and think the plan is going to just fix things.”