It's all about the future as No. 6 Sooners visit Huskers 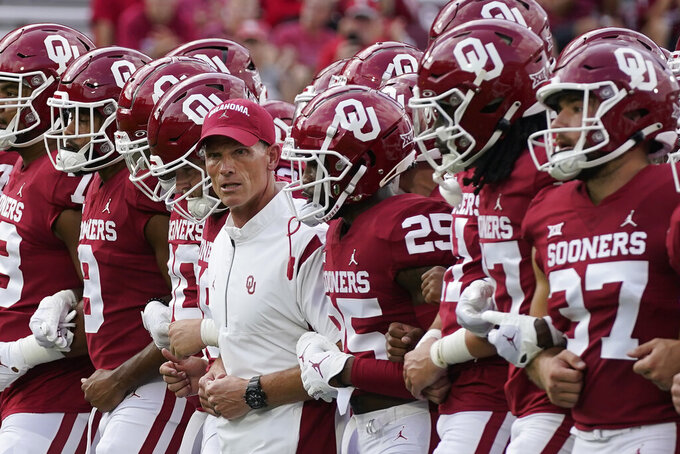 LINCOLN, Neb. (AP) — The idea behind scheduling the home-and-home series between Oklahoma and Nebraska was to allow fans and former players to bask in the nostalgia of one of college football's greatest rivalries.

In the big picture, it will be more about looking forward than celebrating the past when the teams meet Saturday at Memorial Stadium.

The game is the first since Nebraska (1-2) fired Scott Frost three games into his fifth season. Mickey Joseph, who was in his first year as wide receivers coach, takes over as interim head coach for a program that is just a shell of the one that battled the Sooners year in and year out decades ago.

For sixth-ranked Oklahoma (2-0), this is an opportunity to polish things up before a challenging start to Big 12 play next week against Kansas State. The Sooners go into the Nebraska game as 10 1/2-point favorites, according to FanDuel Sportsbook.

Some of the most prominent figures from the rivalry — Tom Osborne, Barry Switzer, Johnny Rodgers, Joe Washington, Jeff Kinney and Brian Bosworth among them — are expected to get together to relive memories and attend the game.

The players who will be on the field weren't alive when Oklahoma-Nebraska was one of the most anticipated games each season. The teams combined for 44 of 48 Big Seven and Big Eight championships and 12 national titles from 1948-95.

“Just a ton of incredible moments in this series history, a series that represents class and integrity and incredible success. Hall-of-Fame moments, players, coaches and certainly a bunch of championships," first-year OU coach Brent Venables said.

Osborne, then Nebraska's athletic director, and Oklahoma's Joe Castiglione agreed in 2012 to renew the series in 2021 and 2022. Oklahoma won 23-16 in Norman last year in the first meeting since the 2010 Big 12 championship game. The Huskers moved to the Big Ten in 2011.

Joseph experienced the rivalry as a Nebraska quarterback, and it wasn't pleasant. In 1990, three muscles in his lower leg were sliced to the bone when he was pushed into the Oklahoma bench. The muscles were repositioned and sewn together during surgery, and his season was over. The Huskers lost 45-10, and he didn't play in the next year's 19-14 win.

Joseph didn't have time to reminisce this week. He said he was surprised Sunday when he found out Frost had been fired. Since being named interim coach, Joseph said, his focus has been on salvaging the rest of the season.

“We move everything to the past and we start from here,” he said. “We have nine more opportunities and we are capable of winning games, and that is why (the players) understand the first opportunity is this weekend against OU.”

Oklahoma has allowed one touchdown and recorded nine sacks and a nation-best 23 tackles for loss through two games.

“I can promise you we’re not beating our chest,” Venables said. “We’re leaving a lot of meat on the bone, in my opinion. There’s a lot more to be had and needs to be had.”

Nebraska has lost 18 straight against Top 25 opponents, its last win coming against Oregon in 2016 under Mike Riley. Oklahoma hasn't lost to an unranked nonconference opponent in the regular season since 2005 (UCLA).

Nebraska quarterback Casey Thompson is the son of former Oklahoma QB Charles Thompson, who is best known for his performance in the No. 2 Sooners' 17-7 win over the top-ranked Huskers in 1987.

Casey transferred to Nebraska from Texas in January. He had a career game against the Sooners last year, throwing for 388 yards and five touchdowns in the Longhorns' 55-48 loss.

OU defensive lineman Reggie Grimes' family has ties to Nebraska. His mother, Mikaela Perry-Grimes, is from Omaha and ranks among the state's greatest high school track athletes. She ran track for the Huskers in 1994 before transferring to Alabama. Reggie has four sacks this season.

Nebraska is holding a reunion for its 1970 and '71 national championship teams. The most famous win of that era was the 35-31 victory over Oklahoma in the “Game of the Century” in Norman on Thanksgiving Day in 1971.