Jimmy Kimmel to be title sponsor of inaugural LA Bowl 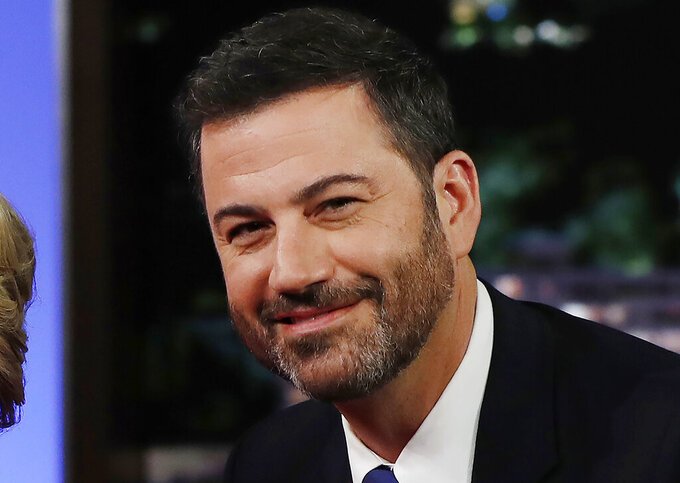 FILE - In this Aug. 22, 2016, file photo, ABC talk show host Jimmy Kimmel poses with then Democratic presidential nominee Hillary Clinton, unseen, during a break in taping of "Jimmy Kimmel Live!" in Los Angeles. Kimmel announced Wednesday, June 17, 2021, on his show that he will be the title sponsor of college football's LA Bowl that is scheduled to be played Dec. 18 at SoFi Stadium in Inglewood, Ca. (AP Photo/Carolyn Kaster, File)

The inaugural edition of the Jimmy Kimmel LA Bowl will be played Dec. 18 at SoFi Stadium in Inglewood, the host announced on “Jimmy Kimmel Live” on Wednesday night. The game will air on ABC.

“This is not a joke,” Kimmel said during his opening monologue. “This is a real bowl game named after me, so mark your calendars. ... It’s like an early Christmas gift for all of us.”

SoFi Stadium confirmed it has reached a multiyear deal with Kimmel to put his name above the title of the LA Bowl, the first college football game to be played at the year-old arena. The game's debut was delayed from 2020 until 2021 due to the coronavirus pandemic, but it will match the Mountain West champion against the Pac-12's No. 5 bowl selection.

“Never before has a bowl game been named after a human being (as far as I know, I didn’t check),” Kimmel said in a statement announcing the news. “On December 18, my dream of being forever enshrined alongside orange, rose, cotton and peach comes true.”

The LA Bowl was established to create another big annual event for SoFi Stadium, which was built by Los Angeles Rams owner Stan Kroenke as part of a large multi-use development on the former site of the Hollywood Park racetrack.

The multibillion-dollar arena opened last year, when the Rams and the Los Angeles Chargers played a full NFL season without fans in the stands. SoFi Stadium recently announced both teams will play at full fan capacity in the upcoming season, which begins with a preseason game between its two tenants Aug. 14.

The stadium will host the next Super Bowl on Feb. 13, 2022, followed by the College Football Playoff National Championship on Jan. 9, 2023. The arena hopes to host World Cup matches in 2026, and it is likely to be the site of the opening and closing ceremonies of the Los Angeles Olympics in 2028.