Kelly making sure No. 16 UCLA isn't resting on its laurels 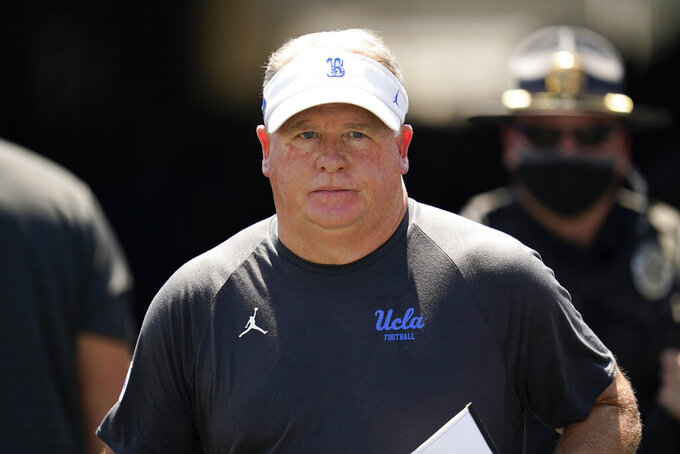 LOS ANGELES (AP) — Chip Kelly has made it a point to eschew topics relating to history and trends. However, the UCLA coach has gone to the history books this week to keep his team focused on not resting on its laurels.

After a 38-27 victory over LSU last Saturday put the 2-0 Bruins in the AP Top 25 for the first time since 2017, Kelly reminded his 16th-ranked squad that an early victory over the Tigers wouldn’t mean much in December unless they take care of business in the remaining 10 regular-season games.

“We need to continue to work because 2-0 just means you are 2-0. You know you can be 2-10 when it’s all said and done,” Kelly said. “Mississippi State beat LSU in the opener last year, and then they lost their next four games.”

UCLA also can look at its history to understand that a quick start can be fleeting. The Bruins are off to their first 2-0 start since 2017 when they then proceeded to lose four of their next five and finish 6-7. Jim Mora was fired before the final regular-season game, which led to the hiring of Kelly.

Kelly, who is 12-21 in Westwood, is hoping to avoid the same fate as Mora as the Bruins look for their first winning season since 2015. Kelly is confident his players aren't letting their early success get to their heads.

UCLA got a rare, early bye week after a Week 0 game against Hawaii on Aug. 28. Kelly called it an improvement week as he looks to clean up some things that have plagued his team the first two games.

Kelly noted the most significant areas in need of improvement are snaps from center, cleaning up penalties, and fixing some communication issues between plays. Kelly said players did not know the signals during a couple of plays.

Jon Gaines II has started both games at center in place of Sam Marrazzo. Gaines had a couple of high snaps against LSU, but quarterback Dorian Thompson-Robinson got to them to throw the ball away to avoid a huge loss. Marrazzo, a junior, was injured in last year’s season finale but was doing individual drills Wednesday during the portion of practice open to the media.

The Bruins are also beginning to focus on their Sept. 18 game against Fresno State. The Bulldogs (1-1) had a fourth-quarter lead last week at No. 12 Oregon before losing 31-24.

Fresno State also has some bragging rights over UCLA after a 38-14 victory when the two teams met in 2018.

“It’s time to reset. We’ve been coming into practice real focused,” cornerback Cam Johnson said. “We have a chip on our shoulder from the past few years, and we were trying to prove a point this year. We know what we have, so we’re ignoring the hype.”