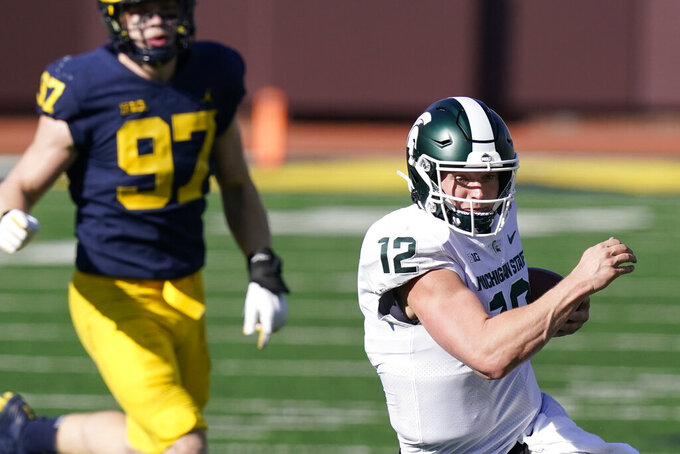 There's no doubt who the Spartans' top choice is now.

It wasn't long ago that there was a bit of mystery about who Michigan State's starter would be in the season opener, but Lombardi — who had the most experience — was the pick, and he's off to a nice start with two straight 300-yard games. He threw for 323 yards and three touchdowns last weekend in an upset victory over Michigan. There are few better ways to win over Spartans fans.

Lombardi, who started three games at quarterback as a redshirt freshman in 2018, now looks as if he'll hold that role for a lot longer.

Lombardi will probably still have some growing pains this year. In fact, Michigan State opened the season with a loss to Rutgers that snapped the Scarlet Knights' 21-game losing streak in Big Ten play. The Spartans turned the ball over seven times that day, although Lombardi did throw for 319 yards and three touchdowns, along with two interceptions.

It was a tough day for the new starting quarterback, and for new Michigan State coach Mel Tucker, but Lombardi saw some positive signs.

“Really, offensively, I felt very good about the way we played, if you take away those turnovers,” Lombardi said. "We showed it on (the following) Saturday. We had no turnovers, and we end up winning the game.”

Indeed, Michigan State's turnaround last weekend at Michigan was remarkable. The Spartans prevailed 27-24, in large part because Lombardi was able to throw deep against the Wolverines. He went just 17 of 32 but made those completions count.

Lombardi led Michigan State on an 11-play, 92-yard drive in the fourth quarter, converting a couple third downs and then completing a pass of 31 yards to Ricky White. Lombardi threw a 13-yard touchdown pass to Connor Heyward to give the Spartans a 27-17 lead. After Michigan answered with a touchdown, Lombardi converted a fourth-down run that enabled Michigan State to run out the clock.

“We knew him and tried to recruit him and he has done a great job up there,” said Iowa coach Kirk Ferentz, whose team hosts the Spartans this weekend. “He played pretty extensively a couple years ago when their starter was hurt, and he certainly, like most players, he's a better player than he was two years ago. He's done a really nice job and they had some unbelievably great big plays the other day."

This weekend's game will be special for Lombardi, who is from Clive, Iowa.

“It’ll be really good. My mom doesn’t get to come to a lot of games. I got four other siblings that are all busy, all involved in sports," he said. "It’ll be nice to have her come to the game and my sisters get to come see me play. It doesn’t really happen that often, so it’ll be emotional for me. This is a real homecoming for me. I’ve had this game circled since I committed here.”

Although impressing family would be nice, this is also a chance for Lombardi and the Spartans to build on their big victory last weekend — one that raised expectations for the season after the team's desultory start.

This version clarifies that Lombardi had three starts at quarterback in 2018.