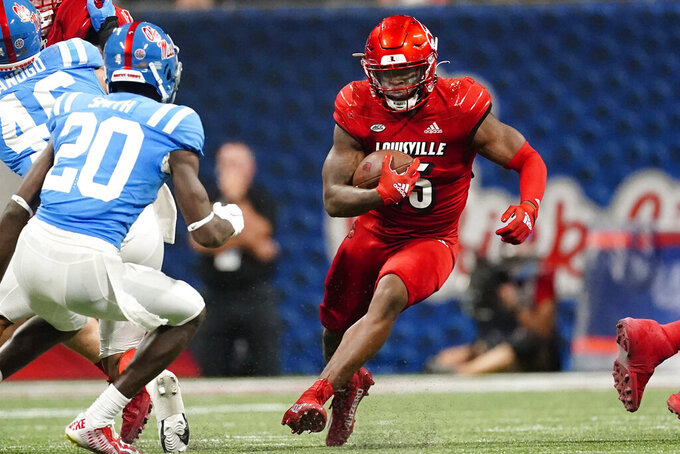 Louisville running back Jalen Mitchell (15) runs up the middle as Mississippi defensive back Keidron Smith (20) moves in during the second half of an NCAA college football game Monday, Sept. 6, 2021, in Atlanta. (AP Photo/John Bazemore) 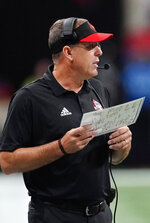 LOUISVILLE, Ky. (AP) — A quick turnaround might be what Louisville needs to move past its disappointing opening-game showing.

The Cardinals have a lot to forget about Monday night’s 43-24 loss to Mississippi in Atlanta. Their defense couldn’t stop the Rebels much of the game and the offense was shut out until the third quarter, when the outcome was effectively settled.

Hosting FCS Eastern Kentucky (1-0) in Saturday night’s nonconference meeting allows Louisville to correct all that went wrong against Ole Miss, and maybe even provide the urgency it lacked.

“We’re not going to sit here and say we forgot about that feeling of losing because that’s not what we want to do,” Louisville safety Kenderick Duncan said. “We still got that thought in our heads of what happened. We’ve got this extra edge to go play this Saturday and just go all in.”

While the Cardinals faced this week's compacted schedule no matter what, their time since returning early Tuesday morning has been spent trying to reboot all phases after a surprisingly disappointing performance.

Ole Miss passed for 381 yards alone to outgain Louisville 569-355. That wasn’t entirely shocking considering the Rebels had one of the nation’s top offenses last season. More stunning was how the Cardinals’ own high-octane offense stalled against one of the worst defenses before posting 24 second half points — when it didn't matter.

Even still, the finish provided one of few positives Louisville coach Scott Satterfield wants his team to build from.

“I mean, it’s too little too late, but it showed fight,” he said. “It showed that we’re capable of doing it. We’re capable of hanging in there. We’ve just got to have a better start.”

As Louisville tries to grasp what happened, it must also prepare for an EKU team seeking to follow up an opening-game win.

The Colonels took a big step toward moving past last season’s 3-6 finish by topping Western Carolina 31-28 last week in nonconference play. They were outgained 501-356 but rallied twice to win behind running back Da’Joun Hewitt, who rushed for three touchdowns.

Picked to finish third as first-year members of the Atlantic Sun Conference, they aim make the most of non-league play before a conference schedule that includes defending FCS national champion Sam Houston State.

Their challenge is stopping a Louisville determined to overcome a bad outing.

“I think you’ll see a different Louisville team,” second-year EKU coach Walt Wells said. “You’ll see a team that corrected the mistakes they made. They’ll fast and they’ll play physical, and we have to match that.”

Some other things to watch as Louisville hosts Eastern Kentucky:

“We’re still figuring out who’s going to be those playmakers,” Satterfield said. “We’ll work that out and see where we’re at on Saturday.”

Hewitt thrived in his first career start, rushing 22 times for 78 yards and touchdowns of 1, 3 and 18 yards at Western Carolina. The Purdue transfer earned ASUN offensive player and freshman of the week honors on Monday.

Louisville expects to have linebacker Monty Montgomery and defensive lineman Tabarius Peterson back on Saturday after both were ejected for targeting against Ole Miss. The game featured two targeting calls and ejections against both teams.

Louisville leads 19-8-1 and has won 11 of 12 meetings against its in-state rival located just over 100 miles away in Richmond. That includes a 42-0 victory two years ago. The Colonels seek their first win since November 1985 that marked the Cardinals’ last loss to a FCS opponent. They’ve won 19 in a row since.