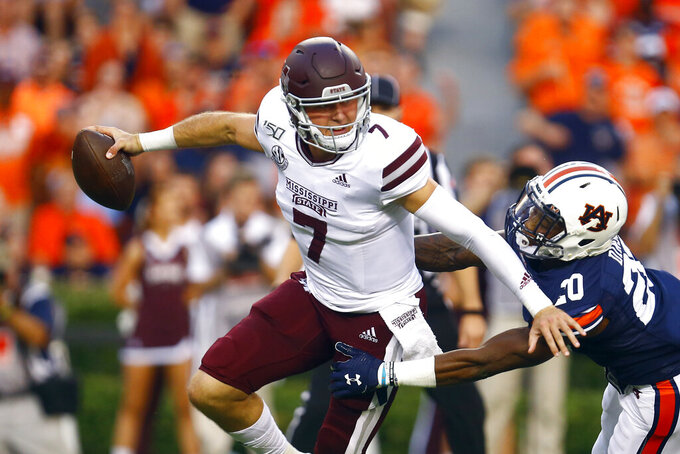 Mississippi State quarterback Tommy Stevens (7) is sacked by Auburn defensive back Jeremiah Dinson (20) during the first half of an NCAA college football game, Saturday, Sept. 28, 2019, in Auburn, Ala. (AP Photo/Butch Dill)

KNOXVILLE, Tenn. (AP) — Mississippi State coach Joe Moorhead says he has a pretty good idea which of his quarterbacks will start the Bulldogs' game at Tennessee.

He's just not publicly saying who it will be.

Tennessee coach Jeremy Pruitt isn't being quite as coy about his team's quarterback plans.

Mississippi State's Tommy Stevens and Garrett Shrader have both earned plenty of playing time for the Bulldogs (3-2, 1-1 SEC) this season, with Stevens' injuries often forcing Shrader into action. Mississippi State coach Joe Moorhead said both quarterbacks are dealing with lower-body injuries but practiced fully on Sunday.

"We kind of have a plan for what we expect to do with both of them healthy," Moorhead said Monday. "We'll continue to grind through the week, work the plan and see where we're at on Friday."

Freshman Brian Maurer made his first career start Saturday in a 43-14 loss to No. 3 Georgia after junior Jarrett Guarantano had started 22 of the Volunteers' last 23 games leading up to that one. Maurer responded by throwing two touchdown passes to give Tennessee an early lead before struggling in the second half.

Although Pruitt isn't ready to name Maurer this week's starter just yet, the coach made it apparent which way he's leaning.

"I think he would really have to have a bad week of practice not to (start on Saturday), but we'll see how the week goes," Pruitt said.

Maurer finished 14 of 28 for 259 yards with two touchdown passes, an interception and a fumble against Georgia. He was 10 of 21 for 205 yards and two touchdowns in the first half before throwing for just 54 yards and committing both his turnovers in the second half.

Mississippi State had last week off, giving the Bulldogs more time to address their quarterback situation before Saturday's game with Tennessee.

Stevens, a Penn State graduate transfer, has started four of Mississippi State's first five games and has completed 63.8 percent of his passes for 448 yards with five touchdowns and two interceptions. Injuries caused him to leave three of his starts early and prevented him from playing at all in a victory over Kentucky .

"We have a starter in mind right now," Moorhead said. "That doesn't preclude both from playing, either in separate series or both playing at the same time, either. We have a plan for one to start, one to play and then possibly (for) two to play at the same time, so (we) cover all the bases."