No. 10 Florida, Mullen return to work after COVID outbreak 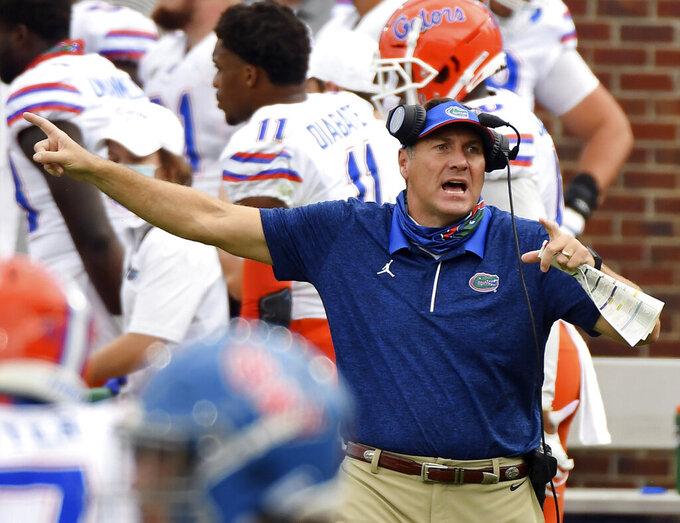 FILE - In this Sept. 26, 2020, file photo, Florida head coach Dan Mullen reacts during the second half of an NCAA college football game against Mississippi in Oxford, Miss. No. 10 Florida resumed meetings and practices for the first time in two weeks Monday, Oct. 26, 2020. They got back to work after a COVID-19 outbreak caused the Southeastern Conference to postpone two of the team’s games. (AP Photo/Thomas Graning, File)

GAINESVILLE, Fla. (AP) — No. 10 Florida resumed meetings and practices for the first time in two weeks Monday, getting back to work after a COVID-19 outbreak caused the Southeastern Conference to postpone two of the team’s games.

The Gators (2-1) are scheduled to host Missouri (2-2) on Saturday, ending a 21-day layoff and beginning the first of seven consecutive games for coach Dan Mullen and his team.

Mullen was one of more than 30 players and coaches who tested positive for the coronavirus following a road trip to Texas A&M earlier this month. Everyone else on the plane — about 75 people in all — was quarantined because of potential exposure and contact tracing protocols.

It forced the Gators to shut down team activities and work remotely. It also left Mullen with concerns about missing so much time on the field and away from a daily routine.

“We’ve got some veteran players,” Mullen said. “For those guys, just picking it back up and getting going. Fortunately, when you have some older, veteran guys, it helps. But we’ll see.”

Adding to the team’s issues: SEC rules mandate that players who tested positive must adhere to a four-day reacclimation period that includes cardiac monitoring. The protocols call for Day 1 practice to be 25% or a normal routine, with Day 2 increasing to 50%, Day 3 at 75% and then full participation on Day 4.

It essentially means Mullen won’t be able to get his full team on the field for a full practice until Thursday.

Still, he was able to hold an in-person team meeting Monday for the first time in what seemed like forever.

“This year’s been kind of a unique year like no other, with stops and starts, and different schedules, and kind of everything going on. Our guys, I thought, have handled everything extremely well throughout the year, so I think they’re going to be really excited to get back out there on the practice field.”

“I don’t expect us to come out there and have certainly our sharpest, most crisp practice of the year,” he said. “But I do expect us to have great energy, excitement and enthusiasm to be on the field to be back out there to get going as we kind of build up to Saturday.”

Mullen said he felt “rested, for sure" following his 10-day quarantine, the worst of which was “being isolated in your house and not being able to see your family.”

The Gators have traced their outbreak to two players ignoring symptoms and getting on the team plane headed to Texas A&M. Both players had tested negative the day before the trip.

But they tested positive the day after the game and likely spread it to teammates and coaches on the plane, in the hotel, in the cramped confines of a visiting locker room, at team meals and on the flight home.

“We always knew the travel was going to be a concern and an issue for us,” Mullen said. “When you add those all up, all of those different combinations, you add that up, and you throw the virus in the middle of it with obviously someone having it on the team, or at least maybe two people I’m guessing have it on the team, and then you put it in to that environment, you’re going to get a spread.”