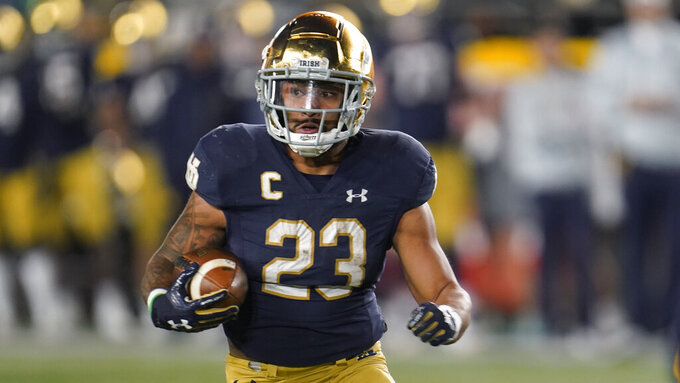 To Kelly, the Tar Heels (4-3) are a sleeping giant. Ranked No. 10 in the preseason AP Top 25 and a favorite to reach the ACC title game, North Carolina already had three losses before edging Miami 45-42 two weeks ago.

“Look, it’s about winning football games,” said Kelly, whose team has won two straight since losing at home to No. 2 Cincinnati. “On any given night (when) this team (North Carolina) puts it together, they’re as good as any team we’ve played this year. It’s a talented football team.”

Start with 6-foot-1¼, 225-pound junior quarterback Sam Howell, who has completed 61.1% of his passes for 1,851 yards and 18 touchdowns and has added 493 yards and five touchdowns rushing for the Tar Heels. Then there is a veteran offensive line, running back Ty Chandler (588 yards and seven TDs) and sophomore wide receiver Josh Downs (60 receptions, 837 yards and eight TDs).

That could be too many goblins to handle for the Irish defense, which is fifth nationally with 17 turnovers (11 interceptions, six fumble recoveries) but will be minus junior All-America free safety Kyle Hamilton because of a knee injury.

Last season, North Carolina and Notre Dame were tied 17-all at halftime before the Irish defense dominated the second half for a 31-17 victory.

“They were more physical than us,” Brown said.

The Irish struggled early this season running the football, but now a jelling offensive line has produced 350 rushing yards and five touchdowns in the two recent victories, including 219 yards and three scores by running back Kyren Williams. The Irish also have gone up-tempo on offense behind two quarterbacks, Jack Coan (63.2% completions, 1,397 yards and 11 TDs) and Tyler Buchner plus a talented group of receivers led by sophomore tight end Michael Mayer.

While at Texas, Brown coached in the 2003 Hula Bowl and was assisted by Kelly, then the Grand Valley State head coach Kelly. Among current FBS coaches, the pair have a combined 63 years as head coaches, have coached in 777 games (Saturday will be Brown’s 400th) and stand 1-2 in victories (Kelly 279, Brown 263).

“He was just a great mentor to me as a young coach,” Kelly said.

Notre Dame defensive end Isaiah Foskey, who has eight sacks this season, remembers how difficult it was to get to Howell last season.

“They had some big O-linemen and Howell was tough to bring down,” said Foskey, who managed one of Notre Dame’s six sacks in last year’s victory. “He’s running more this year, and it’s always a challenge going against a running quarterback.”

If Howell throws for 300 yards, he will pass North Carolina career leader T.J. Yates (9,377 yards). He already is the leader in career passing touchdowns with 86.

“I feel like I kind of have a fresh start after the bye week,” Howell said. “I feel really good about the improvements I made from a health standpoint.”

In the last two victories, the Irish have settled on tackle Joe Alt and guard Andrew Kristofic on the left side of center Jarrett Patterson, right guard Cain Madden and right tackle Josh Lugg.

“It took a bit longer than we may have expected,” the 6-foot-4¼, 295-pound Kristofic said. “But we have a group of guys who are extremely dedicated to getting better every day.”

Kelly indicated Thursday that Hamilton is making progress from his knee injury but still won’t play. Hamilton has spent the week working with backup rovers Isaiah Pryor and Xavier Watts, who are being asked to back up Hamilton's replacement, DJ Brown.

“Not being able to play changes your perspective,” Kelly said. “He’s learning about himself. When you’re a captain and you’re not playing, you still have to leave something at the end of the day on the field. For him, it’s leave some knowledge. He’s done a really good job.”