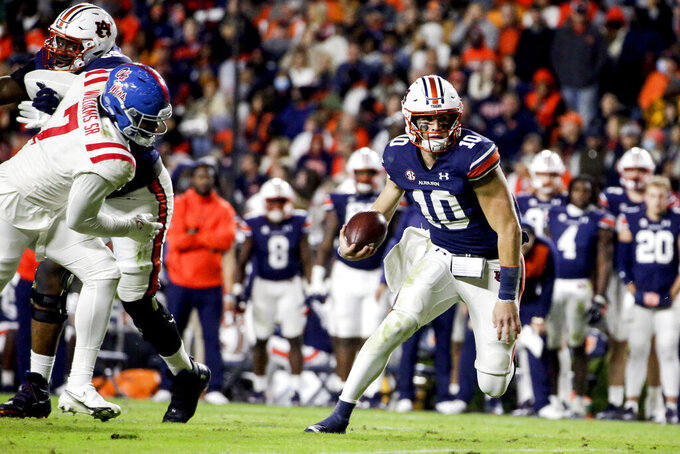 Auburn quarterback Bo Nix (10) carries the ball against Mississippi during the first half of an NCAA college football game Saturday, Oct. 30, 2021 in Auburn, Ala. (AP Photo/Butch Dill)

Line: Texas A&M by 4 ½, according to FanDuel Sportsbook.

Auburn has won four of five and is second in the SEC West standings behind Alabama. They need a win Saturday to keep within striking distance of the Crimson Tide, who they'll face at the end of the regular season. The Aggies are looking for their fourth straight victory and their first win over Auburn in College Station.

Texas A&M’s running game led by Isaiah Spiller and Devon Achane vs. Auburn’s run defense. Spiller and Achane have both had 100 yards rushing in three games this season, including each of the last two and the Tigers rank 37th in the nation by allowing 121.1 yards rushing a game. If Spiller and Achane can make it three straight on Saturday, it will be the first time the Aggies have had a pair of rushers both surpass 100 yards in four games in a season since 1990.

Auburn: QB Bo Nix threw for 276 yards and a score and ran for two touchdowns in a 31-20 win over Mississippi last week. It was his ninth career game with at least one passing TD and one rushing score, which is the most at Auburn since 2000.

Texas A&M: TE Jalen Wydermyer had his best performance this season in A&M’s last game when he had four receptions for 75 yards and two touchdowns. He has 1,306 yards receiving in his career, which is the most by a tight end in school history. He led A&M in a victory over Auburn last season when he grabbed two touchdown passes.

Saturday will be the fourth meeting between these teams where both were ranked. ... The teams first met in 1911. ... Auburn is first in the SEC and fourth in the nation with 7.88 tackles for loss a game. ... Auburn LB Zakoby McClain was named SEC defensive player of the week after finishing with 14 tackles and a career-high two sacks last week. ... The Tigers have allowed just eight sacks this season, which ranks fourth in the country. ... The Aggies rank fourth in the nation by allowing just 16.1 points a game.