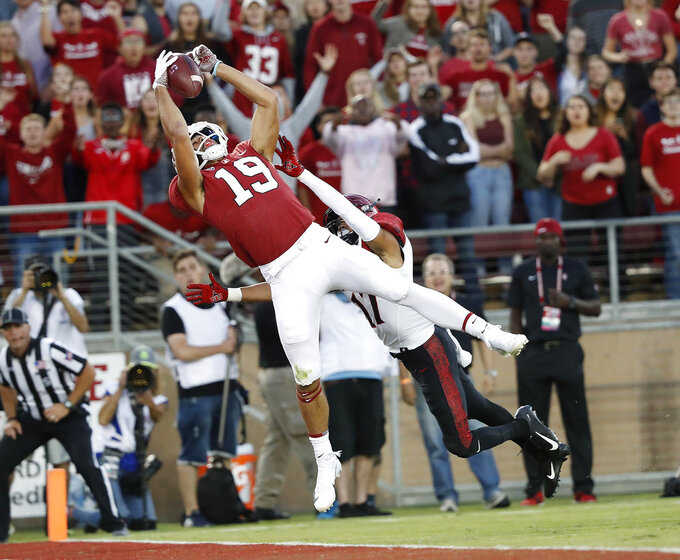 STANFORD, Calif. (AP) — JJ Arcega-Whiteside caught three TD passes from K.J. Costello to overcome a slow night by Heisman Trophy runner-up Bryce Love and No. 13 Stanford opened the season with a 31-10 victory over San Diego State on Friday.
"That's what their game plan was, to load up the box and play one-on-ones on the outside," Arcega-Whiteside said. "That's what you want and all you can ask for. Now teams know they can't just load up the box and play one-on-one on the outside."
Love was held to 29 yards on 18 carries as the Aztecs (0-1) focused their defense on stopping the man who led all Power 5 backs with 2,118 yards rushing last season.
After a slow start, the Cardinal (1-0) made San Diego State pay for that decision. Costello connected with Arcega-Whiteside on a 38-yard score in the second quarter and then on plays from 19 and 80 yards in the third quarter as the Aztecs defensive backs struggled to contend with Stanford's big receiver. Arcega-Whiteside finished with six catches for 226 yards.
"That's the goal to be as balanced as possible," coach David Shaw said. "If someone wants to take away part of our game, we'll shift our focus and take advantage of that."
Costello added a 19-yard TD pass to Colby Parkinson in the fourth quarter to break open what had been a close game for more than a half. Costello finished 21 for 31 for 332 yards and four TDs.
The game turned following an odd sequence late in the first half. Noble Hall intercepted a deflected pass for San Diego State but then lost the ball when Stanford receiver Trent Irwin raced back and knocked it loose before recovering the fumble.
Three plays later, Costello found Arcega-Whiteside deep for his first touchdown that gave Stanford a 9-7 lead at the half.
"The first half went pretty well," Aztecs coach Rocky Long said. "We intercepted the ball and if we don't fumble it right back, we go into the locker room with a lead. When the last play of the first half is a long touchdown pass, that ruins any momentum we had into halftime."
The Aztecs had scored first behind talented back Juwan Washington, who gashed Stanford with runs of 22, 10 and 40 yards on a 92-yard drive that ended with his 4-yard score.
THE TAKEAWAY
San Diego State: The Aztecs looks like they have another dynamic back to follow 2,000-yard rushers Donnel Pumphrey and Rashaad Penny, who led the way the past two years. Washington ran for a career-high 158 yards on 24 carries, gaining 84 on the first TD drive and adding a 39-yard run in the third quarter. He will need more help on offense as the season goes on for San Diego State to be successful.
Stanford: The game got off to an inauspicious start with the Cardinal calling a timeout before the first snap of the season. Jet Toner missed a 38-yard field goal on the opening drive and the offense struggled to get going early as the Aztecs bottled up Love. Stanford finally got on the board midway through the second quarter when Jake Bailey's 63-yard punt went out of bounds at the 1 and Bobby Okereke sacked Christian Chapman in the end zone.
UP NEXT
San Diego State: Host Sacramento State on Sept. 8.
Stanford: Host No. 15 Southern California on Sept. 8.
___
More AP college football: https://apnews.com/tag/Collegefootball and https://twitter.com/AP_Top25