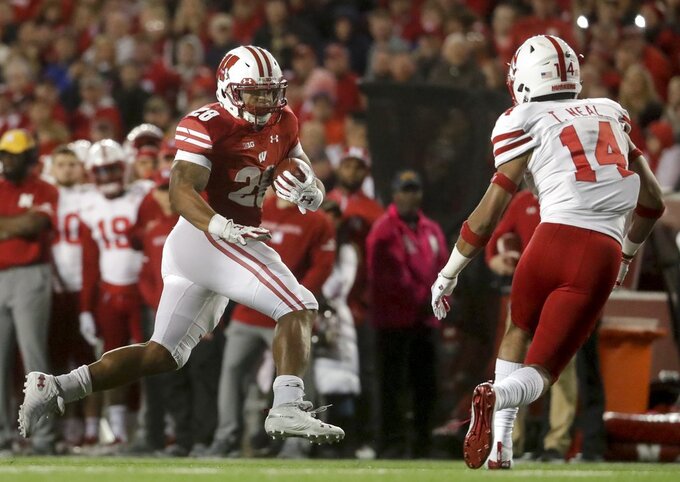 Wisconsin's Taiwan Deal runs for a touchdown during the second half of an NCAA college football game against Nebraska Saturday, Oct. 6, 2018, in Madison, Wis. (AP Photo/Morry Gash)

MADISON, Wis. (AP) — Jonathan Taylor ran for 221 yards and three scores, including a career-best 88-yarder in the fourth quarter, and No. 16 Wisconsin's punishing ground game wore down winless Nebraska in a 41-24 victory Saturday night.

Playing short-handed in the secondary, the Badgers (4-1, 2-0 Big Ten) withstood the Cornhuskers' desperate second-half comeback attempt from a 17-point halftime deficit led by two touchdown passes in the third quarter by Adrian Martinez.

"We didn't get to him as much as we'd like," linebacker T.J. Edwards said. "We did what he had to do to win so overall it was a good game."

Nebraska's offense flashed big-play promise behind their freshman quarterback, who threw for 384 yards and rushed for a score. JD Spielman had nine catches for 209 yards, including a 75-yard touchdown catch.

It still wasn't enough to prevent the Cornhuskers (0-5, 0-3) from losing their ninth straight game, extending a program record.

Just too many mistakes to keep up with the disciplined Badgers.

"You can't let a team like this get out in front of you because they're going to keep pounding you and pounding you," Nebraska coach Scott Frost said.

The Cornhuskers still kept attacking through the air, a smart move considering Wisconsin was thin at cornerback because of injuries. Martinez found Jack Stoll for a 12-yard touchdown pass with 4:20 left to get back within 17.

Nebraska was driving again early in the fourth quarter with a chance to cut into the lead.

Edwards, a preseason All-American, finally put a stop to their comeback hopes. The inside linebacker had his second sack of the night on third-and-14 to force a punt.

Taylor barreled through the line on the next play from scrimmage before speeding away from a winded defense for his 88-yard score and a 41-17 lead with 12:50 left.

Right guard Beau Benzchawel said the line got a sense early in the game that they could dominate up front.

"We just had to clean some things up and get everybody on the same page," he said. "We knew that if we did that - get everybody where they needed to be, we'd make big plays."

Martinez finished 24-of-42 passing, adding 57 yards on the ground on 13 carries.

Nebraska: There is potential on offense with Martinez's athleticism and ability to throw down field. In his third start, he seemed to be more at ease after halftime with the Cornhuskers trying to comeback. He appeared to be tentative at times in the first half while under pressure. And a season-long problem with penalties must be addressed.

Wisconsin: The young secondary banged up at cornerback coming into the game took two more hits after cornerback Deron Harrell left with a head injury in the second quarter. Safety Scott Nelson was then ejected for targeting late in the third quarter, meaning he will miss the first half of next week's prime-time matchup on the road at No. 15 Michigan. Backup safety Eric Burrell, along with freshmen cornerbacks Rachad Wildgoose and Donte Burton may have to get up to speed quickly. Wisconsin also had chances for at least three interceptions but errant passes bounced off the hands of defenders.