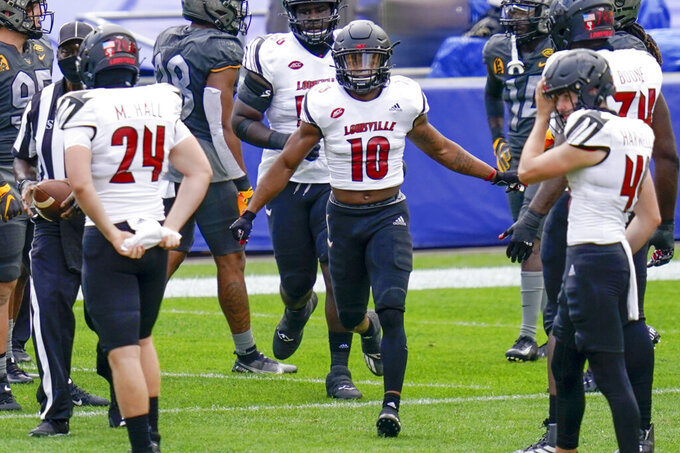 Louisville running back Javian Hawkins (10) celebrates with teammates after making a long touchdown run against Pittsburgh during the first half of an NCAA college football game, Saturday, Sept. 26, 2020, in Pittsburgh. (AP Photo/Keith Srakocic) 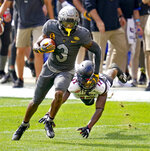 “We want it all,” the senior defensive end said.

Jones collected three of Pitt's seven sacks, helping the Panthers beat No. 24 Louisville 23-20 on Saturday. The win pushed Pitt (3-0, 2-0 Atlantic Coast Conference) to its best start since 2014 and adhered to a blueprint the Panthers believe can carry them to the conference title game in December: tough, physical defense and just enough offense to get by.

So far, it's working. The Panthers held the Cardinals (1-2, 0-2) to 223 yards — less than half of what they had been averaging coming in — and never let Malik Cunningham get comfortable. Cunningham completed just 9 of 21 passes for 107 yards with a touchdown and three picks, the last a fourth-down interception by Pitt's Jason Pinnock with 1:19 remaining.

Cunningham ended up leaving on a stretcher after the play with an undisclosed injury. Coach Scott Satterfield said the junior had feeling in all his extremities and was being evaluated.

The sight of their rising star heading into the tunnel with his head strapped to a board marked a difficult end to a difficult day for the Cardinals. Louisville struggled to generate much of anything offensively thanks to the relentless pursuit of Pitt's defensive front.

“We’ve played some good D lines, but they were different,” Satterfield said. “They played fast, they played physical.”

And they played exactly the way they knew they would play against the Cardinals. Sporting alternate charcoal grey uniforms inspired by both the architecture on the Pitt campus and the region's legacy as a leading global steel producer, the defense often resembled a cloud of dust that swarmed anything in a white jersey that happened to come into its path.

“I know the Steel Curtain is the Pittsburgh Steelers but today (we were) dominant up front," Panthers coach Pat Narduzzi said.

When they weren't, the secondary picked them up most of the time. Other than a 21-yard touchdown pass from Cunningham to Atwell on a busted coverage in the second quarter that briefly gave Louisville a 17-13 lead, the Cardinals found little room to work.

Three times Louisville had the ball in the fourth quarter with a chance to take the lead. The drives ended with interception, punt, interception.

“Our D-line, they trust that we're always going to take away the first read,” Pinnock said. “And we trust that they are going to get there. So we can undercut routes, we can do things that maybe, if you didn't trust your D-line, you couldn't do. We play well together.”

Pitt kicker Alex Kessman missed two kicks last week and had another go astray on a botched snap. He bounced back to drill three field goals, each of them from 41 yards or more. Kessman attributed his resilience to a chat with his sports psychologist and the ability to get out of his own head.

RETURN OF THE MACK

Pitt quarterback Kenny Pickett completed 23 of 38 passes for 220 yards with two touchdowns and a pick. The second score went to senior Taysir Mack. Playing in his first game of the season, Mack caught three passes for 62 yards, including a 40-yard TD in which he somehow kept his left knee off the ground while fighting off defenders at the Louisville 20. Mack kept his feet churning while everyone else on the field stopped.

“That's my guy,” Pickett said of Mack. “We've been through a lot. I knew he had fresh legs.”

Louisville: The Cardinals were hoping to take another significant step forward in coach Scott Satterfield's second season. An 0-2 start in the conference and Cunningham's injury will make that a difficult proposition over the remaining eight games.

Pitt: The offense remains a bit of a mixed bag but the defense should give the Panthers a chance to win week in and week out.

Louisville: The Cardinals likely will drop out of the polls.

Pitt: Even with teams from conferences currently not playing being allowed into the polls this week, expect the Panthers to at least stay at 21 or perhaps even rise a bit.

Louisville: Is off next weekend then visits Georgia Tech on Oct. 9.

Pitt: Wraps up a stretch of four straight games at Heinz Field to start the season when North Carolina State visits next Saturday.