No. 22 SMU hosts Navy with both teams coming off losses 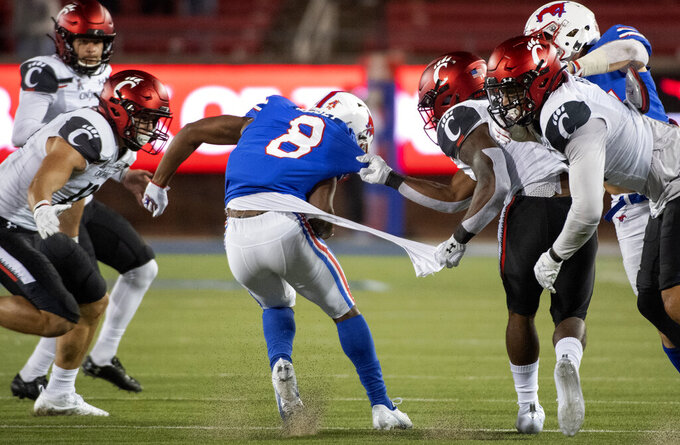 Since there are no divisions in the American Athletic Conference in the pandemic-shortened season, the race remains wide open. The winner of this matchup will still be in the thick of the chase for a spot in the AAC championship game. The loser will be in trouble. Both teams are trying to bounce back from losses. SMU's first of the season was 42-13 to No. 7 Cincinnati. Navy had two straight wins before losing at home to Houston.

SMU's Shane Buechele is looking to bounce back from season lows in completion percentage (52%) and passing efficiency (96.5) against the Bearcats. It's the only game in two seasons with the Mustangs with an efficiency rating below 100 for the former Texas quarterback.

Navy RBs Nelson Smith and Jamale Carothers share the lead rushing duties in the triple option. Smith has 66 carries for 392 yards and six touchdowns. Carothers has 82 carries for 326 yards and two scores.

QB Dalen Morris should be making his fourth straight start for the Midshipmen after he was one of three different starters in the first three games. It's the first time Navy has started the season that way since 1992. ... SMU ranks seventh nationally with 12 takeaways (six interceptions, six fumble recoveries). Navy has thrown three picks and lost three fumbles. ... Navy’s last win over a Top-25 team was last year at home against SMU. The Mustangs were ranked 21st going into Navy's 35-28 victory in Annapolis. Coach Ken Niumatalolo has five wins over ranked teams, second in school history to Eddie Erdelatz (10 from 1950-58). ... Sonny Dykes (20-12) is the fourth SMU coach to win 20 games in his first three seasons, and the first since Bobby Collins won 31 from 1982-84.