No. 24 Tennessee eyes respect, revenge at No. 17 Pittsburgh 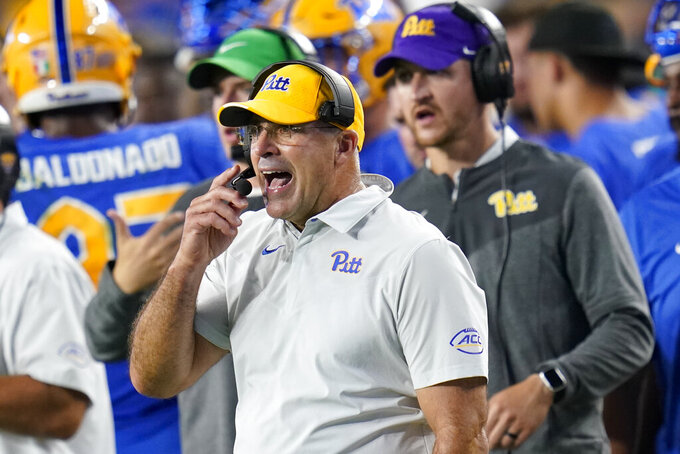 Line: Tennessee by 6½, according to FanDuel Sportsbook.

A road win over a ranked opponent would give Tennessee some serious momentum in Josh Heupel's second season. The Panthers haven't shied away about the prospect of becoming a College Football Playoff sleeper. A victory over the Volunteers and that notion doesn't seem quite so far-fetched. Pitt's schedule is hardly daunting. The Panthers could potentially be heavy favorites in each of their next nine games before a trip to No. 15 Miami in late November.

Pitt's offensive line vs. Tennessee's defensive front. The Panthers' best chance to keep the fast-paced Volunteers' offense off the field is by controlling the ball. The running game was sluggish at times last week against West Virginia, and running back Rodney Hammond's status is uncertain after being hurt in the fourth quarter against the Mountaineers. Pitt's veteran front — the Panthers returned all five starters from 2021 — needs to do a better job of protecting QB Kedon Slovis and opening up running lanes to avoid getting into a shootout with the talented Volunteers.

Tennessee: Sixth-year QB Hendon Hooker. He came off the bench against Pittsburgh last year due to Joe Milton’s leg injury. He opened this season as the starter and was very efficient with four touchdowns in the opening 59-10 win over Ball State. Hooker has thrown at least one TD pass in 13 straight games, the second-longest streak in school history to Heath Shuler (18).

Pitt: DE Calijah Kancey. The preseason All-American saw his fourth season with the Panthers get off to a quiet start. He collected just four tackles and one tackle for loss against West Virginia. Kancey will lead a defensive front trying to rebound after allowing 190 yards rushing to the Mountaineers. If Pitt wants to keep Hooker in check, Kancey creating havoc in the Tennessee backfield is a must.

This is the first-ever visit by a Southeastern Conference team to Pittsburgh. ... The Panthers knocked off the Volunteers in Knoxville 41-34 last September. ... Tennessee is averaging 40.7 points a game since Heupel was hired. The Volunteers have scored 45 points or more in four consecutive games, tying a school record set in 1993. ... C Cooper Mays missed the game between these teams last year because of an injury. ... This is Tennessee’s first nonconference road game against a Power Five team since losing at Oklahoma 34-10 on Sept. 13, 2014. ... Pitt QB Kedon Slovis threw for 308 yards in his first start with the Panthers, the most by a Pitt QB in a season opener since 1998. ... Pitt has scored a defensive touchdown in each of its last three games dating back to the 2021 ACC championship. ... The game is billed as the Johnny Majors Classic. Majors won a national title at Pitt in 1976 before spending the next 16 years coaching the Volunteers.