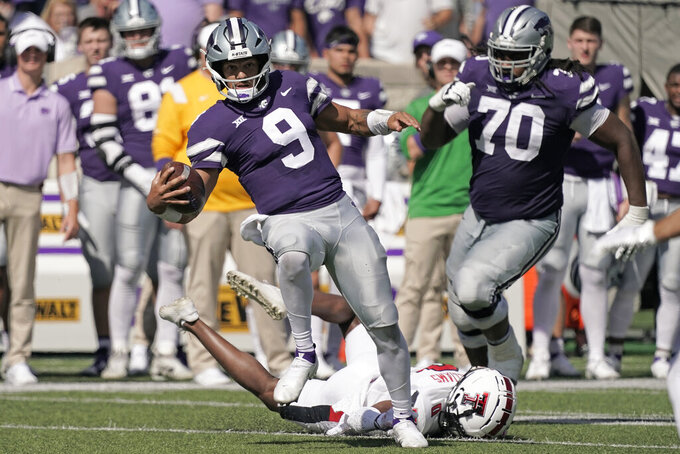 MANHATTAN, Kan. (AP) — All it took was one play for Kansas State quarterback Adrian Martinez to set the tone against Texas Tech.

And that play was the first of Saturday's game — a 57-yard run that quickly put the Red Raiders on their heels.

“Explosive plays are a big stat for us,” said Martinez, who scored on an 18-yard run on the ensuing play. “It goes along with turnovers and a couple other key factors. It definitely helped us.”

Martinez rushed for 171 yards and three touchdowns and threw for another score to lead No. 25 Kansas State to a 37-28 victory. He was 12-for-19 passing for 116 yards for Kansas State (4-1, 2-0 Big 12), while Deuce Vaughn had 170 rushing yards for the Wildcats, who extended their winning streak against the Red Raiders to seven games.

Martinez and Vaughn combined for three runs of at least 50 yards, plus another that was nullified by a holding penalty.

“One of the things we talked about at halftime was we had to have some people step up and make some explosive plays,” Vaughn said. “That’s a testament to the O-linemen and the guys blocking downfield. They opened up some big holes.”

Donovan Smith was 34-for-48 passing for 359 yards and two TDs for Texas Tech (3-2, 1-1). Smith also rushed for a touchdown. But he was sacked six times, three each by Felix Anudike-Uzomah and Khalid Duke.

“We proved we’re a physical team and we’re not backing down on any competition,” Anudike-Uzomah said. “That’s what’s going to happen all season. Me and Khalid are going to take down every offense we come (against).”

The Wildcats also got a pair of field goals from Chris Tennant after drives stalled.

“We’ve got to find a way to play better early on the road,” Tech coach Joey McGuire said. “The guys fought back, got the score tied. But we’ve just got to do a better job playing cleaner early. You can’t come in and do that against a really good K-State team.”

Tech cut the lead to 13-7 with 1:24 left in the first half. After gaining just 48 yards of total offense, the Red Raiders went 86 yards on nine plays, capped by a 6-yard touchdown pass from Smith to Nehemiah Martinez.

“I’m proud of our guys’ resolve in the second half,” Kansas State coach Chris Klieman said. “We got off to a great start in the first half. We got up 13-0 and then played poorly in the second quarter. We got out of rhythm on offense and didn’t tackle well on defense. I was a little upset at halftime.

"We needed to stand up in the second half and show that people aren’t going to push us around at home. We played really well late in the third quarter and in the fourth quarter.”

K-State answered Tech’s field goal with its second two-play drive of the game. Vaughn ran 69 yards to the Tech 8-yard line on the first play after the kickoff. Following an offensive holding penalty, Martinez found Phillip Brooks with an 18-yard touchdown pass.

Martinez then scored on his second big run of the day, 69 yards untouched up the middle.

“They decided to bring pressure," Martinez said. "If you do that, there’s no one left. Deuce was on a route. We kind of looked at each other and said, ‘It’s just me and you.’ ”

Tennant’s 32-yard field goal gave the Wildcats a 30-20 lead with 9:07 left. A fumble on the next series gave K-State the ball at the Tech 27-yard line and the Wildcats iced the game with Martinez’s third rushing touchdown.

Smith scored from 3 yards out for Tech’s final touchdown with 2:23 left.

Texas Tech: Smith can carry the Red Raiders on offense. The 6-foot-5 quarterback can sling it, but he also has the ability to carry defenders when he chooses to run.

Kansas State: The Wildcats have two great ballcarriers. Besides Vaughan, an All-American, Martinez can fool defenses with his elusiveness.